Drawing on a wide variety of sources, including extensive interviews, the authors suggest that during the 1930s, not only did Schneerson appear uninterested in becoming a Hasidic rebbe, but he actually engaged in behavior that was guaranteed to raise the eyebrows of other Hasidim, including his own father-in-law.

Biography / The accidental rebbe
Though he never turned his back on his Lubavitch lineage, Menachem Mendel Schneerson was on his way to becoming a Parisian professional who frequently eschewed Hasidic garb. Then came World War II.
By Nathaniel Deutsch • Ha’aretz

The Rebbe: The Life and Afterlife of Menachem Mendel Schneerson by Samuel Heilman and Menachem Friedman Princeton University Press; 382 pages, $29.95 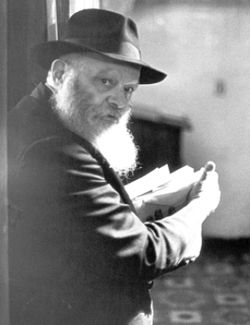 On June 23, 1941, a Jewish immigrant named Menachem Mendel Schneerson arrived in New York Harbor after a 10-day ocean journey beginning in Lisbon, Portugal. Almost 40 years old, childless, and with a hard-earned degree in engineering from a French institute, Schneerson had spent much of the prior decade in Paris, where he and his wife, Moussia, were living when the war broke out, forcing them to flee via Marseilles.

Like other Jewish refugees from Europe, Schneerson would have to start life again in America, with little or no English, few immediate job prospects, and the guilt of having escaped the unfolding catastrophe while so many loved ones did not. Yet Schneerson was also different from most of his fellow refugees in two ways: He wore a beard - which was unusual enough that the immigration official in New York noted it in his records - and his wife (and cousin ) was the daughter of a Hasidic rebbe, in this case, Yosef Yitzchak Schneersohn, the sixth leader of the Chabad-Lubavitch dynasty, who died in 1950.

I begin this review of Samuel Heilman and Menachem Friedman's illuminating new book "The Rebbe: The Life and Afterlife of Menachem Mendel Schneerson," with Schneerson's arrival in the United States because the authors make the convincing case that this was the turning point in his extraordinary life. According to the authors (both sociologists, the former a professor at City University of New York, the latter professor emeritus at Bar-Ilan University), despite his marriage to Moussia and his own descent from generations of Lubavitch leaders, there is little if any evidence to suggest that prior to World War II, Schneerson either personally intended or was being groomed to become the next Lubavitcher rebbe.

Instead, the authors argue that Schneerson - or "Mendel," as he was known growing up - had chosen a much more mundane, if, for a poor Hasidic refugee from the Soviet Union, arduous, path: to become an engineer, gain French citizenship and live a Jewishly observant life in Paris. Indeed, the portrait that emerges from the first half of this clearly written and engaging biography is of an accidental rebbe, one whose future would have been radically different had World War II not broken out and put an end to his relatively modest aspirations.

Drawing on a wide variety of sources, including extensive interviews, the authors suggest that during the 1930s, not only did Schneerson appear uninterested in becoming a Hasidic rebbe, but he actually engaged in behavior that was guaranteed to raise the eyebrows of other Hasidim, including his own father-in-law. Schneerson, who spent his youth in Yekaterinoslav, where he studied traditional Jewish subjects and had a tutor in mathematics and Russian, beyond being deeply committed to getting a degree in engineering, a pursuit that was frowned upon within Chabad as bittul torah (time taken away from study ), was also engaged in a courtship with his future wife, the independent-minded Moussia, that was so long as to be considered unseemly. He frequently eschewed traditional Hasidic garb, and sported a beard that the authors describe as "too short for Rabbi Yosef Yitzchak's preference but too long for the Americans."

And yet, it would be wrong to assume that Schneerson had fallen off the path of traditional Judaism. Instead, the authors demonstrate that even as he doggedly pursued an engineering degree and enjoyed the cafe culture of the Left Bank, Schneerson continued to observe the commandments, devoted time to studying Hasidic texts and learning Chabad customs (under the long-distance guidance of his father, who remained in the USSR), and made regular holiday visits to his his father-in-law's Hasidic court. Moreover, toward the end of the 1930s, Schneerson took on a number of supra-halakhic, pious practices, such as regular fasting and wearing additional pairs of tefillin. In short, unlike many of his contemporaries, Schneerson refused to choose between his identity as a devout Hasidic Jew and his identity as an aspiring Parisian professional.

All this would change dramatically in the years after Schneerson was met at the dock by four of his father-in-law's Hasidic followers and brought to Crown Heights, the Brooklyn neighborhood where he would live - and would hardly leave - for the next half a century. Heilman and Friedman, the most important sociologists of contemporary Haredi Judaism in the United States and Israel, respectively, portray this second act of Schneerson's life as a classically American tale of immigrant reinvention, with his rise to prominence involving the kind of flinty self-determination found in a Horatio Alger novel. "These were years when America was 'starting over' too, an America filled with promise," the authors write. He "would become a renewed almost reborn person in America; he would no longer be Mendel Schneerson, would-be French engineer and student .... by 1951 he would be reinvented and remade. No longer the shy introvert, he became the self-confident extrovert and leader, emerging as Grand Rabbi Menachem Mendel Schneerson [emphasis in original]."

If World War II was the historical event that changed his trajectory and brought him to America's shores as a refugee, once Schneerson arrived, his dramatic transformation from mild-mannered Clark Kent to Hasidic Superman was anything but accidental. Instead, the authors portray Schneerson as engineering his own ascent to the leadership of the Chabad community with the calculated brilliance of a chess grandmaster. Most important, Schneerson "outflanked and superseded his rival, Rabbi Shmaryahu Gourary," who was married to Yosef Yitzchak's oldest daughter and who had long held the number two position in Chabad under his father-in-law.

Significantly, Schneerson did not view or present his own leadership as a radical departure from his father-in-law's mission, but as its extension and completion. Indeed, for readers unfamiliar with the voluminous literature of Chabad, one of the book's most important revelations will be its account of how Schneerson drew on longstanding Lubavitch beliefs and, in particular, his predecessor's messianic ideology, to promote the fervent messianism that would come to define Lubavitch during and after his own tenure as rebbe.

Moreover, Heilman and Friedman argue that this messianism not only offered a solution to the problems faced by the Jewish people, but also to those faced by Schneerson himself: "It solved the dilemma of what the future would hold for a barren couple. It promised redemption to all of the Jewish people. If the Messiah was coming, there was no need for children and heirs or even for a career." In the following decades, Schneerson would articulate an ideology that not only emphasized the messiah's imminent appearance, but also stressed that the seventh generation of the Chabad dynasty would be the last before the messianic age, a belief that would later complicate the question of succession.

In the postwar period in the United States, two towering figures with radically different approaches and personalities did more to revive and expand Hasidism than anyone else: Yoel Teitelbaum, the Satmar rebbe, who established the largest and most insular Hasidic community in America in the gritty Brooklyn neighborhood of Williamsburg, and Schneerson, whose outreach campaigns brought Chabad's distinctive brand of Hasidism from his red-bricked headquarters at 770 Eastern Parkway to a world-wide audience and, in the process, transformed him into such a recognizable brand that many secular Jews immediately know who he is when they see his now-iconic image or think of him when they hear the word "rebbe."

While the authors explore the messianic dimensions of this outreach, they also portray the dramatic growth of Chabad in sociological terms that recall yet another classically American phenomenon: the visionary entrepreneur who creates a network of salesmen, franchises and advertising campaigns to sell his product. The expansion campaign of Chabad, known by the catchphrase ufaratzta ("you shall burst forth," in Hebrew ), was also aided by other developments in contemporary American culture, namely, the growing popularity of alternative forms of spirituality during the 1960s and 1970s, and the rise of multiculturalism in the 1980s and 1990s.

Since his death, in 1994, it is the thriving network initially created by Schneerson that has allowed Chabad not only to survive but to expand into practically every corner of the planet, even as debates over messianism continue to cause tensions among adherents of the movement. Invoking the sociologist Max Weber's concept of "the routinization of charisma," the authors end their book by exploring what the future may hold for the movement now that their intensely charismatic leader is no longer physically present and, especially, once those who knew him personally die out. "From the long view of the history of religion, fifteen years, the time that as of this writing has elapsed since the Rebbe's passing, represents an insignificant period," they conclude. "One needs to wait at least two generations to see how religious change develops and whether movements die, fractionalize, or are sustained."

Readers looking for a thorough exploration of Menachem Mendel Schneerson's thought via his voluminous writings and talks will not find it in this book (for that, they should read Elliot Wolfson's "Open Secret: Postmessianic Messianism and the Mystical Revision of Menachem Mendel Schneerson" ), but for anyone interested in a sophisticated sociological analysis of how Schneerson was able to become "The Rebbe," this is a must read.

Nathaniel Deutsch is a professor of history and literature at the University of California, Santa Cruz.

Posted at 10:35 AM in Chabad, Chabad History | Permalink

Drawing on a wide variety of sources, including extensive interviews, the authors suggest that during the 1930s, not only did Schneerson appear uninterested in becoming a Hasidic rebbe, but he actually engaged in behavior that was guaranteed to raise the eyebrows of other Hasidim, including his own father-in-law.