The lights and water have been turned off at the Jewish center stormed by Pakistani gunmen during their 2008 rampage through the Indian financial capital, and the windows remain gaping holes that let in the wind.

At stake is who controls and redesigns the property, the feelings of a family still whipsawed by grief and the legacy of six lives tragically lost in this nondescript building that served as a spiritual oasis for Jews in the city.

"The building is just standing there looking so gloomy," Nachman Holtzberg said through a translator Wednesday, as he sat beneath photos of his son, Rabbi Gavriel Holtzberg, and daughter-in-law on the ground floor of the Chabad House. "We would not have chosen to go to court."

But go to court they did, to respond to a suit from Chabad Lubavitch, a New York-based Orthodox Jewish group that runs Chabad Houses across the world.

The rabbi's parents say the group has been too slow to reconstruct the building where gunmen slaughtered their son, his wife and four others during the Islamic militants' 60-hour rampage that claimed 166 lives in all across the city.

Holtzberg's parents say that after a year and a half of waiting they began using their own money to rebuild and fear Chabad will turn the house into a memorial, rather than a living testament to their son's work.

Chabad, however, says it had to halt the family's construction efforts because they were unsafe and lacked the necessary permits. They hired a construction firm in June and have given them a $14,000 deposit.

"It's sometimes arduous to endure the long time it takes to acquire all the permits and other things necessary to ensure proper safety, but we are adamant about ensuring that all construction is done legally and safely, both from a security perspective as well as a structural one," said group spokesman Rabbi Motti Seligson.

Chabad's vision for the house, outlined in October, includes a kosher kitchen, synagogue and function space, with the top two floors dedicated to memorials. The group, which has been operating from a second, undisclosed location, may well maintain facilities — for example, for living quarters — at another site as well.

In late October, Rabbi Yosef Kantor, the director of Chabad in Thailand who also oversees the group's activities in India, filed a suit in Mumbai civil court to stop work on the building.

The suit was filed against Eliran Russo, a businessman who says he has power of attorney in India for Nachman Holtzberg. Holzberg is a member of the trust that controls the building, and under that authority Russo embarked on the broader construction efforts, which he maintains are safe and legal. He said he used family funds as well as other donations.

"We did all the legal necessary steps needed for this rebuilding, together with our lawyer," Russo said. "We are meaning to continue and hope the court will allow us."

Beneath the contentious construction lie questions about who has legal control of the property. The title to the property lies with the Chabad of India Trust, which Gavriel Holtzberg helped set up in 2005, two years after he came to Mumbai to serve as rabbi. 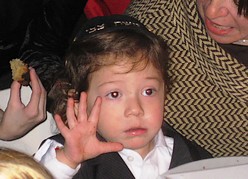 His family maintains that Kantor does not have the right to serve as a trustee, and instead only Holtzberg's heir can appoint or remove trustees. That heir is his 4-year-old son Moshe, who escaped the carnage with the help of his nanny and now lives in Israel.

Chabad's Seligson dismissed that argument, saying Kantor, the Chabad director in Thailand, has been a member of the trust since its inception. He added that Kantor had also appointed the Holtzmans to serve in Mumbai and was their boss. Moreover, Chabad Lubavitch says its headquarters in Brooklyn, N.Y. paid for the building's purchase.

Responding to allegations in the Indian press that Chabad has misappropriated money that should have been used for reconstruction, Chabad says it raised $1.6 million after the 2008 attack, over half of which has been put in a trust for Moshe. It has spent another $75,000 on the building's upkeep and rebuilding plans and is holding the balance for the actual reconstruction. All funds are independently audited, the group says.

Hovering over the debate is the tiny figure of Moshe. Both Chabad and Holtzberg's parents say they want to make sure that if Moshe comes back to Mumbai, he will see towering evidence of his parents' legacy.

His grandmother, Frieda Holtzberg, said the child likes to draw pictures of houses.

"He says, 'It's my home in Bombay,'" she said, referring to Mumbai's former name. "Somehow his heart is still very connected here."

So here again we have Chabad's claim to have raised only $1.6 million, which is laughable on its face. If you believe that is all Chabad raised on the Mumbai tragedy, I have a bridge to sell you in Brooklyn.

[And here's a hint for the New York Times, which first published and then censored out Chabad's claim to have raised only $1.6 million dollars and its claim that all funds raised past those allocated to Moshe's trust would be used to rebuild Nariman House: you got caught red handed, and now the AP has unittingly confirmed it. Doesn't that make you feel, well, both foolish and dishonest?]

Added to the transparently false claim that Chabad raised only $1.6 million is another claim that the funds are "independently audited" – even though Chabad has refused to release those "audits."

A key to understanding what is happening is to realize that Chabad, through Rabbi Yosef Kantor, Chabad's designated capo di tutti capi of most of the Far East and India, has for the past two years opposed the Holtzberg's and Rosenberg's admission to the board overseeing Chabad of Mumbai and Nariman House, as the Hindustan Times reports:

Both Jewish groups want their own trustees
Hindustan Times

Mumbai – The dispute over ownership of the Chabad House in Colaba, south Mumbai, is now being fought before the charity commissioner. Eliran Russo, constituted attorney of Rabbi Nachman and Freida Holtzberg, Moshe’s grandparents, has opposed induction of new trustees in the Chabad India Trust, which was founded by Moshe’s parents — Rabbi Gavriel and Rivka Holtzberg.

A Change Report is an application for introducing change in trusteeship.

Dalvi was inducted as a trustee by Gavriel in 2006. After death of Holtzbergs, Dalvi has sought induction of Moshe Dov Gansborg and Joel Kurulkar as trustees instead of Gavriel and Rivka.

Russo’s counsels had also filed a Change Report in 2009, seeking induction of Nachman, Shimon Rosenberg (Rivka’s father) and one Moses Samson as trustees.

The Chabad Trust is collecting money for reconstructing the building.

“Also there is likelihood that funds collected may be misused,” alleges Russo’s affidavit.

Dalvi, who was present in the charity commissioner’s officer, refused to speak saying,  “No comments.”

Rabbi Joseph Kantor, who claims he was appointed by the New York-headquartered Chabad Lubavitch as its official “responsible for the rebuilding effort in Mumbai” is also opposing induction of Nachman and Rosenberg.

Kantor has filed a suit in the city civil and sessions court against Russo carrying out renovation at the Nariman House.

Since Chabad's fundraising rebuilding Nariman House and caring for Moshe Holtzberg is based in Brooklyn, there is a way to determine the truth and to locate all the money raised for both purposes, including finding what is likely millions of dollars that are missing.

It is called an IRS audit.

And it can't come too soon.