« Haredi Kosher Food Producer Refuses To Pay $260,000 In Back Wages To Fired Workers | Main | The "Best Revenge" Will Be Moshe Returning To Mumbai As Rabbi Of Chabad House »

Shas newspaper compares maverick lawmaker to the biblical tribe of Amalek, which Jews are commanded to wipe out. In response, a lawyer filed a police complaint about the threats against Amsalem while the Knesset's Master of Arms assigned a bodyguard to protect Amsalem 24/7.

In his first public statements on the maelstrom raging in Shas around MK Rabbi Haim Amsalem, party chairman Eli Yishai spent an hour on Thursday lashing out against the lawmaker. 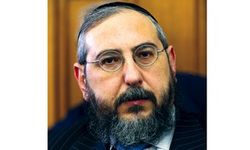 Amsalem is refusing to resign from the Knesset, despite the demands of the party’s spiritual leadership.

“Nobody knew who he was a minute before he joined Shas,” Yishai said in an interview with Radio Kol Berama, which is affiliated with Shas.

As for the possibility of Amsalem forming a new political party, Yishai said that “without a rabbinical council of leaders behind him, not even his wife would vote for him.”

Amsalem was recently officially ousted from the party for expressing opinions such as that only a select minority should dedicate their lives to Torah scholarship, while the others should combine work with study; that non-Jews in Israel from the former Soviet Union with Jewish roots should be provided an easier way into converting to Judaism; that everyone should acquire the basic skills of mathematics and a foreign language, as provided in the state’s core curriculum; and that Sephardic Judaism should not bow its head before the Ashkenazi Lithuanian haredi leadership, which Amsalem says Shas is doing in its stances on matters of religion and education.

Yishai also denied Amsalem’s assertion that he and others prevented the MK from meeting with Rabbi Ovadia Yosef, head of the Shas Council of Torah Sages, in order to truthfully present his stances on Torah scholarship, employment, secular studies and conversions.

“There wasn’t even one time that Amsalem wanted to meet with him and he couldn’t,” Yishai said, and added that recently “Yosef himself told his secretary he doesn’t want to meet with Amsalem, since he doesn’t listen to him and distorts his opinion.”

Amsalem did not respond to Yishai’s interview.

Earlier on Thursday, Shas newspaper Yom Leyom took the hostilities against Amsalem to new heights, comparing the lawmaker to Amalek.

The front page of the weekly paper, as well as much of a supplement, were dedicated to Amsalem, the Shas Council of Torah Sages’s Monday decision, and elaborations on the “sinful ways” of the MK.

“We demand of Mr. Haim Amsalem by the law of Torah to return his mandate to Shas,” the four-man body of senior Sephardi rabbis had written in their edict. “If he doesn’t do so, he is a thief in broad daylight... And we call on all of those who care about the Torah to keep far away from him and his strange and heretical opinions.”

A wealth of quotes from the council’s decision condemning Amsalem, strongly worded by council head Yosef, were quoted and analyzed by various writers throughout the newspaper.

But Ron Halevy, writing in the supplement, outdid all others in comparing Amsalem to a biblical-era foe whom Jews are ordered to eradicate.

Writing about the “vast damage” that Amsalem’s “empty claims” have caused, Halevy wrote that “with arrogance and boastfulness, that man did the deed of Amalek who the Torah orders us to wipe out his memory, ‘who met thee by the way.’”

The verse from Deuteronomy continues, “and smote the hindmost of thee.”

The Knesset’s master of arms on Thursday ordered a bodyguard to accompany Amsalem at all times.

Amsalem’s office said that “the incitement in wall posters and newspapers that are tantamount to wall posters is very severe. The comparison to Amalek has but one meaning that is clear and dangerous. This is certainly not the way of Torah.”

Sources close to Amsalem were undecided on what they would do in response to the alleged incitement, but Idan Abuhav, a private attorney, decided on his own to both file a complaint with the Tel Aviv police about threats and incitement to violence, as well as write a letter to State Attorney Moshe Lador and Attorney-General Yehuda Weinstein asking that they order a criminal investigation into the implicit incitement to violence in the newspaper.

“We secular folk cannot sit on the sidelines and observe how a haredi MK with an agenda of bringing the publics closer to one another, encouraging haredim to join the workforce and study core curriculum subjects, will be the victim of combined attack from all sides,” Abuhav told The Jerusalem Post.

Abuhav stressed that his complaint was not against the council and its harshly worded decision, nor against Shas, and noted his good working relations with some of the party’s other members.

This is only against the statements in Yom Leyom that contain violent incitement, he said.

“We’ve already seen a public figure [prime minister Yitzhak Rabin] here murdered in part due to talk and an atmosphere created. In this case we should be all the more cautious, and not let every bully say what they want,” Abuhav said.

Shas newspaper compares maverick lawmaker to the biblical tribe of Amalek, which Jews are commanded to wipe out. In response, a lawyer filed a police complaint about the threats against Amsalem while the Knesset's Master of Arms assigned a bodyguard to protect Amsalem 24/7.