With rain nowhere in sight, religious leaders and beauty queen fly 1,000 feet up in air to pray for coveted rainfall. 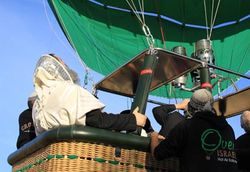 Before dawn on Thursday, Rabbis Menashe Malka and Reuven Deri  boarded a hot air balloon and ascended 1,000 feet in the air in order to pray for timely rain.

The group, which took off from an open field near Kibbutz Ruhama in the Negev, was equipped with a prayer for rain drafted by late Rabbi Mordechai Eliyahu.

With no precipitation in sight, farmers in northern Israel estimate crop damages would reach up to NIS 50 million (about $13 million.) 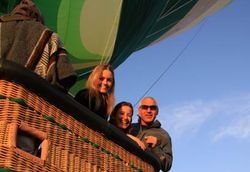 Hot air balloon operator Moran Itzkovitz said that "a joint prayer, while looking down at the amazing scenary of the dry Negev fields, may open the gates of heavens and strengthen farmers across the country."

Also on Thursday, worshippers gathered in the northern town of Hatzor HaGlilit, at the tomb of Honi HaM'agel, who became famous for his ability to successfully pray for rain during a year of draught.

The prayer was attended by chief Rabbis Yona Metzger and Shlomo Amar, council heads, rabbis and yeshiva students from the surrounding areas. The worshippers blew the shofar and recited a special prayer authored by Rabbi Metzger.

On Wednesday, dozens of Rabbis and guests gathered for a mass prayer for rain on board the Ein Gev tourist vessel at the Sea of Galilee.

With rain nowhere in sight, religious leaders and beauty queen fly 1,000 feet up in air to pray for coveted rainfall.