« Mumbai Chabad House "Home" For Baby Moshe, Holtzbergs Say | Main | Part 4: What Did Chabad Do With The Mumbai Money? »

Part Three: The New York Times On The Dispute Over Mumbai's Chabad House

“I want it to come back and have it be better and bigger,” Rabbi Holtzberg said. He added that he waited a year and a half for the Chabad-Lubavitch movement to start renovations and when it did not, he and his wife decided to begin on their own with the help of local supporters. 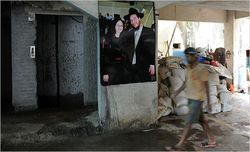 MUMBAI, India — Days ahead of the second anniversary of a deadly terrorist attack on this bustling city, a Jewish center that was the site of some of the most brutal killings has become the subject of an awkward legal dispute.

At issue is who will oversee the renovation of the building that housed the center — the family of the rabbi who was killed there along with his wife or its parent denomination, Chabad-Lubavitch. Also in dispute is how the building, Nariman House, will be used once construction is complete.

At a news conference at the scaffold-clad building on Wednesday, the parents of the rabbi said that they recently started renovating the building, Nariman House, on their own because the denomination was not moving fast enough.

But the Chabad-Lubavitch, a Hasidic group based in Brooklyn, N.Y., has obtained a court order to stop the work and the Bombay High Court will now determine who is responsible for the building, which was badly damaged during a bloody three-day assault. The group says that the renovation work commissioned by the family was not being done with all the necessary government permits.

Ten Pakistan-based terrorists attacked a busy train station, two five-star hotels, Nariman House, and other places in Mumbai on Nov. 26, 2008, killing at least 163 people. The attacks heightened tensions between India and Pakistan, the nuclear-armed neighbors that have fought several wars with each other.

Rabbi Gavriel Holtzberg and his wife, Rivka, were killed along with four other Jews at Nariman House, a five-story building in a narrow alley in southern Mumbai. An Indian nanny saved their then nearly two-year-old son Moshe by spiriting him out of the building. They both now live with his grandparents in Israel.

Nachman and Freida Holtzberg, Gavriel’s parents, said that they were determined to renovate and re-open Nariman House, which they say belongs to an Indian trust created by their son. As guardians of their son’s child, they have asserted that they are entitled to oversee the renovation.

“I want it to come back and have it be better and bigger,” Mr. Holtzberg said in Hebrew; an Israeli journalist who was helping the family translated his remarks. He added that he waited a year and a half for the Chabad-Lubavitch movement to start renovations and when it did not, he and his wife decided to begin on their own with the help of local supporters.

Indian newspapers have reported that Mr. Holtzberg’s camp has also criticized Chabad-Lubavitch for mismanaging money that was donated for the center’s rebuilding, a charge that the group called “outrageous and absolutely false.” The group said it has raised $1.6 million in donations, of which more than half of will go toward Moshe’s upbringing and the rest will be used for the renovation and maintenance of Nariman House.

Mr. Holtzberg and a Mumbai-based Israeli businessman, Eliran Russo, who is working closely with him declined to answer questions about those allegations, which were reportedly made in a court affidavit.

Chabad-Lubavitch officials said they were forced to seek the court’s intervention because the renovation undertaken by the family posed a safety threat. They added that the group signed a contract with a construction company for the building’s renovation as early as June.

“It’s sometimes arduous to endure the long time it takes to acquire all the permits and other things necessary to ensure proper safety,” Rabbi Motti Seligson, a spokesman for Chabad-Lubavitch, said, “but we are adamant about ensuring that all construction is done legally and safely, both from a security perspective as well as a structural one.”

Another disagreement between the Holtzbergs and Chabad appears to be about how Nariman House should be used once it has been rehabilitated.

Chabad officials said they want the building to serve as a memorial and space for functions, and be available to be a home for Moshe if he some day chooses to become a rabbi in Mumbai. But the group’s plans do not appear to include using the house as a residence and the denomination’s primary center.

The Holtzberg family did not provide their detailed vision for the building, but they seem to want it to remain the hub for all Chabad activities in Mumbai. On Thursday morning, they plan to light candles at the center to commemorate the attacks and host an open house. Later in the day, they will attend a court hearing about the building.

I think Chabad's claim to have raised only $1.6 million dollars is not credible, and it makes Rabbi Holtzberg's actions understandable.

Part Three: The New York Times On The Dispute Over Mumbai's Chabad House

“I want it to come back and have it be better and bigger,” Rabbi Holtzberg said. He added that he waited a year and a half for the Chabad-Lubavitch movement to start renovations and when it did not, he and his wife decided to begin on their own with the help of local supporters.