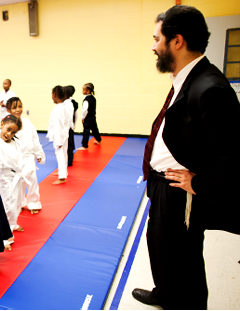 If Cathie Black wants to learn how to run the city's public schools, she should hop in her limo and check out a new one in Brooklyn that's throwing education "rules" out the window.

"Children are not widgets, and neither are teachers," Principal Shimon Waronker - a Hasidic Jew in a yarmulke and tzitzis, the fringed cloth Orthodox men wear under their shirts - says as he weaves through kids in crisp uniforms.

"In the system we have now, teachers are isolated. They don't have a chance to develop."

Waronker, 41, is all about giving kids and teachers room to grow. One recent day, a tiny kindergartner in a navy blue uniform carried her equally tiny violin to music class. Across the hall, first-graders mimed karate moves from a seventh-degree black belt.

Earlier, the kids were seated together in groups of 15, with a teacher at each of four oval tables in one loft-sized room, learning their lessons.

The four educators, from master teacher Lorraine Scorsone to apprentice Andrea Nolet, will stay with the kids until sixth grade, getting to know their learning styles better each year.

Waronker studied our education system at Harvard and found it antiquated.

So he came up with his idea for New American, where the teaching methods are modeled after those at the exclusive Phillips Exeter Academy, with advice from Harvard's Graduate School of Education and cooperation from the teachers union.

"Children need to learn things connected to their lives," he says. "How does water come out of a faucet? How do refrigerators work?"

Schools Chancellor Joel Klein hesitated to assign him to PS 770 for fear of a cultural disconnect with mostly Caribbean students.

But because Waronker lives just three blocks from the school, Klein agreed and let him boost the teacher-student ratio by cutting assistant principals.

His style succeeded before, at Middle School 22 in the South Bronx, where gangs dominated, bullies broke bones and some classes had only five kids because the others played hooky.

After six principals in two years, it was Waronker time. The father of six replaced teachers and suspended troublemakers. Attendance reached 93% and the school came off the most-dangerous list.

He also relates to kids from places like Haiti or the Dominican Republic who don't speak English: He spoke only Spanish when his mother brought him here at age 12 after the death of his father, a labor organizer in Chile. He joined the Army, working in intelligence and learning things that work in education.

"I treated [gang members] like it was a counterinsurgency," he says, noting that some MS 22 troublemakers turned into good students. "Work with them, bring them in."

As for his current charges, Waronker says, "I have no doubt with these kindergartners, that there will be no stopping them."