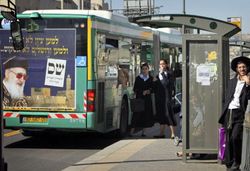 In line with the recommendation, Transportation Ministry officers will monitor buses serving the ultra-Orthodox population to make sure that no violence against female passengers takes place.

It appears, however, that the High Court decision will not effectively overturn the current arrangement aboard the 'Kosher' bus lines, which forbids women from sitting in the front.

Sunday's hearing is expected to be the last to discuss the petition brought up against the Transportation Ministry and the Egged and Dan bus companies in 2007 by a group of women in collaboration with the Israeli Religious Action Center.

The Transportation Ministry recommendation is based on a report presented by an official committee, which advised that well-monitored gender segregation is the best solution. Early in 2010, the High Court called for experimental implementation of the committee's conclusions for a period of one year.

An official High Court decision is expected to be published soon.

"Our tendency is to go with the conclusions that the Transportation Minister has adopted," Rubinstein said. "We are aware that there are reservations, but in our opinion the conclusions are balanced."

Rubinstein's statement drew mixed reactions. Jerusalem City Council member Rachel Azaria told Ynet that the impending High Court decision will effectively validate the current segragation. She called the decision an attempt to have the cake and eat it, too. "On one hand, the court says the separation is illegal. On the other, it allows it to exist," she said.

Public transportation companies welcomed Rubinstein's statements. Attorney Orna Kadar, who represents the Egged bus company, said the decision provides a balanced solution to both sides of the dispute. "We must accept the Transportation Minister's announcement, and thus put an end to this petition," she said.

During the hearing, Attorney Orly Erez-Lachovsky, who represents some of the petitioners, warned against a partial implementation of the official committee's conclusions. "The report is all well and good, but it cannot remain a disregarded law," she said. "In our opinion, the court should declare that the report will be adopted verbatim."

A recent Transportation Ministry investigation did not unearth any complaints on the special bus lines. The report produced by the monitoring company said that no incidents of coercion, aggression, yelling or the like were reported when in connection to the seating arrangement and the separation between men and women.

However, the company did say that on six out of 17 bus rides "the monitoring individuals were asked or required to move from their seats, which they did in order to avoid a confrontation with the local population."

Aviad Glickman contributed to this story.