In A Sliver Of Muslim Indonesia, Judaism Reemerges

Long known as a Christian stronghold and more recently as home to evangelical and charismatic Christian groups, this area on the fringes of northern Indonesia has become the unlikely setting for increasingly public displays of pro-Jewish sentiments as some people have embraced the faith of their Dutch Jewish ancestors.

MANADO, Indonesia — A new, 62-foot-tall menorah, possibly the world’s largest, rises from a mountain overlooking this Indonesian city, courtesy of the local government. Flags of Israel can be spotted on motorcycle taxi stands, one near a six-year-old synagogue that has received a face-lift, including a ceiling with a large Star of David, paid for by local officials.

Long known as a Christian stronghold and more recently as home to evangelical and charismatic Christian groups, this area on the fringes of northern Indonesia has become the unlikely setting for increasingly public displays of pro-Jewish sentiments as some people have embraced the faith of their Dutch Jewish ancestors. With the local governments’ blessing, they are carving out a small space for themselves in the sometimes strangely shifting religious landscape of Indonesia, the country with the world’s largest Muslim population.

The trend comes as extremist Islamic groups have grown bolder in assailing Christian and other religious minorities elsewhere in Indonesia, with the central government, fearful of offending Muslim groups, doing little to prevent the attacks. Last November, extremists protesting the 2008-9 war in Gaza shut down what had been the most prominent remnant of Indonesia’s historic but little-known Jewish community, a century-old synagogue in Surabaya, the country’s second-largest city. 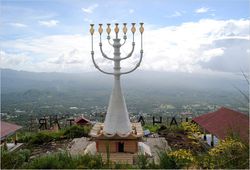 That left the synagogue in a town just outside Manado — founded by Indonesians still struggling to learn about Judaism and now attended by about 10 people — as Indonesia’s sole surviving Jewish house of worship. Before reaching out for help to sometimes suspicious Jewish communities outside Indonesia, they researched Judaism at an Internet cafe here. They turned, they said jokingly, to Rabbi Google for answers. They compiled a Torah by printing pages off the Internet. They sought the finer points of davening on YouTube.

“We’re just trying to be good Jews,” said Toar Palilingan, 27, who, wearing a black coat and a broad-brimmed hat in the ultra-Orthodox style, led a Sabbath dinner at his family home recently with two regulars.

“But if you compare us to Jews in Jerusalem or Brooklyn,” added Mr. Palilingan, now also known as Yaakov Baruch, “we’re not there yet.”

Indonesia and Israel do not have diplomatic relations but have discreetly shared military and economic ties over the decades. In recent years, Jewish businessmen from Israel and elsewhere have quietly traveled here seeking business opportunities.

Moshe Kotel, 47, who was born in El Salvador and has Israeli and American citizenship, has been coming to Manado every year since 2003 and owns a business in organic eggs. Mr. Kotel, whose wife is from the area, said he felt nervous landing at the airport here for the first time.

“It was 11 p.m. already, and I always carry tefillin with me,” Mr. Kotel said, referring to the small leather boxes housing Scriptural passages. “But ever since I saw the Israeli flags on the taxis at the airport, I’ve always felt welcome here.”

The government of North Minahasa, a mostly Christian district here, erected the giant menorah last year at a cost of $150,000, said Margarita Rumokoy, the head of the district’s tourism department.

Denny Wowiling, a local legislator, said he proposed building the menorah after learning about the one in front of Israel’s Knesset. He hoped to attract tourists and businessmen from Europe.

Mr. Wowiling, a Pentecostal Christian, emphasized that Christians and Muslims lived peacefully in the province here, North Sulawesi, but acknowledged that “there are worries that we might be targeted by people from outside.”

Increasingly strong pro-Jewish sentiments also appear to be an outgrowth of an evangelical and charismatic Christian movement that with the help of American and European missionaries has taken root here in the past decade. Some experts regard this movement as a reaction against the growing role of orthodox Islam in much of the rest of Indonesia.

“In Manado, Christianity has always had a strong identity mark in the belief that it’s opposed to the surrounding sea of Islam,” said Theo Kamsma, a scholar at The Hague University who has studied Manado’s Jewish legacy. Christianity and a reemerging Judaism share a “rebellious” nature, he added.

Two years before the menorah was built, a Christian real estate developer raised a 98-foot-tall statue of Jesus on top of a hill here; the statue is about three-quarters the size of Christ the Redeemer in Rio de Janeiro. In the town center, churches belonging to a multitude of denominations now sit a few hundred yards apart.

During Dutch colonial rule, Jewish communities were established in major trading cities where they often dealt in real estate, acting as mediators between colonial rulers and locals, said Anthony Reid, a scholar on Southeast Asia at the Australian National University. Given Indonesia’s traditionally moderate Islam, anti-Jewish sentiments were never strong.

“The anti-Jewish feelings really came in the 1980s and 1990s, all because of the Israeli-Palestinian conflict,” Mr. Reid said.

In Surabaya, in a Jewish cemetery now overgrown with weeds, gravestones indicate that people were buried there as recently as 2007. The synagogue, located on a major street, had been inactive for the past decade but was still being used for funeral services.

“We’d never had any problems until last year,” said Sunarmi Karti, 46, an Indonesian woman in Surabaya who still lives in a house inside the synagogue’s compound and whose stepfather was Jewish.

Here in Manado, families of Dutch Jewish ancestry had practiced their faith openly before Indonesia gained independence from the Netherlands in 1949. After that, they converted to Christianity or Islam for safety.

“We told our children never to talk about our Jewish origins,” said Leo van Beugen, 70, who was raised as a Roman Catholic. “So our grandchildren do not even know.”

Mr. van Beugen is the great-uncle of Mr. Palilingan, who was leading the Sabbath dinner.

It was just over a decade ago, during a heated exchange over the Bible and Moses, that Mr. Palilingan’s maternal great-aunt let slip the family’s Jewish roots. Mr. Palilingan — a lecturer in law at Sam Ratulangi University here, where his father, a Christian, and mother, a Muslim, also teach in the same department — learned that his relatives on his mother’s side descended from a 19th-century Dutch Jewish immigrant, Elias van Beugen.

His great-aunt suggested that he meet the Bollegrafs, once the most prominent Jewish family in Manado. Oral Bollegraf, now 50, had been a Pentecostal Christian all his life but knew that his grandfather had maintained Manado’s only synagogue in the family home.

“We never acknowledged that we were Jewish,” Mr. Bollegraf, who recently went to Israel with Mr. Palilingan, said during the Sabbath dinner. “But everybody in town knew us as a Jewish family.”

Mr. Palilingan made contact with the rabbi who was physically closest, Mordechai Abergel, an emissary in Singapore of the Brooklyn-based Chabad Lubavitch movement. Rabbi Abergel said that Mr. Palilingan had done a “great job” in trying to reconnect with his Jewish roots, though he had yet to undergo a full conversion.

Committed to what he calls the “purity” of ultra-Orthodox Judaism, Mr. Palilingan sometimes wears its adherents’ telltale black and white clothing in public here and even in Jakarta.

“Most Indonesians have never met any Jews, so they think I’m from Iran or somewhere,” Mr. Palilingan said. “One time, a group of Islamic demonstrators came over and said, ‘Salaam aleikum,’ ” peace be upon you.

In A Sliver Of Muslim Indonesia, Judaism Reemerges

Long known as a Christian stronghold and more recently as home to evangelical and charismatic Christian groups, this area on the fringes of northern Indonesia has become the unlikely setting for increasingly public displays of pro-Jewish sentiments as some people have embraced the faith of their Dutch Jewish ancestors.