« Haredi Rabbis Rule: Do Not Rent Apartments To Sudanese Refugees | Main | Podcast: Rabbi To The Drug Addicted, Lost, And Fallen » 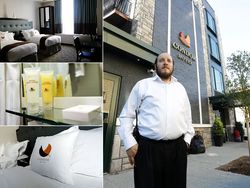 Holidays are supposed to be happy times, but for large Orthodox Jewish families, they can be a handful.

"Most of the families here have on average eight, nine, maybe 10 kids," said Zalman Glauber, a 35-year-old father of five in Williamsburg, Brooklyn. "Housing a guest - it strains the family."

It's no fun for guests, either, who often must contend with a pullout couch and kids buzzing around.

Hotels aren't an easy solution for people who follow religious laws and customs strictly. That's where Glauber, a developer, saw a business opportunity.

Six weeks ago, Glauber and his partner, Zelig Weiss, opened the Condor Hotel at 56 Franklin Ave. in Williamsburg. The Condor targets observant Jews who don't travel on the Sabbath or major holidays, and prefer a hotel that accommodates their needs.

"It's half a block from a shul, from kosher food," Glauber said. "A Jewish businessman who has a show in the Javits Center will much more want to stay in a place where he can daven [pray] and have something to eat kosher."

With introductory rates at $159 - prices are expected to rise to between $170 and $190 - the Condor is trying to tap travelers of all faiths who don't want to spend a small fortune to stay in a Manhattan hotel.

Glauber, who also developed five condo buildings in Williamsburg, has a lot riding on the venture. When the real estate market tanked, his business was pushed to the financial brink and many of his properties were hit with foreclosure actions. He settled with his lenders on most of them, although one foreclosure proceeding is ongoing.

Another major hurdle: Glauber and his partner have no experience in the hotel business. Nonetheless, they invested $5 million to turn a garage on a commercial strip into the Condor.

The idea of a niche hotel for Orthodox Jews had already been tested in Borough Park, which has at least two. Demand for the Condor's 35 rooms has been strong so far, Glauber said, especially on the weekends.

"It's a necessity," said Chaim Markowitz, a nearby resident. "It's a big void, which he is filling up."

At first glance, the Condor looks like any other midpriced, stylish hotel popping up in Brooklyn. But a closer look reveals elements aimed at a niche clientele.

The concierge at the front desk speaks Yiddish. Of course, don't expect anyone to answer the phone from sundown to sunset on the Sabbath, which runs from Friday evening to Saturday evening, or on holidays when the use of phones and other electrical devices is shunned by observant Jews. Also during the Sabbath and holidays, so-called Shabbos elevators stop on every floor.

With a 3,000-square-foot ballroom in the basement (including separate entrances for men and women), the hotel will also try to compete with neighborhood catering halls for weddings and bar mitzvahs.

The Condor is part of a Brooklyn hotel boom. While five years ago, the borough - the city's most populous - had just 600 hotel rooms, there are now 2,400, with up to 900 more under construction.

Even so, "there is a huge underserved market for a hotel that can meet the ritual and highly specific needs that the Orthodox community has," said Lori Rafael, director of real estate and development at the Brooklyn Chamber of Commerce.

Soon enough, the Condor will contend with a competitor - another hotel catering to Hasidic Jews is planned on nearby Wallabout St.