Two Jewish billionaires who came to Berlin from Ukraine last week for a conference on European Jewish life skipped out on the gathering during a session on the global financial crisis. Instead they were downing vodka shots with Israel’s chief rabbi in the basement of Berlin’s gleaming Chabad center.

Like NBA’s Nets, European Jewish group gets an oligarch, but some see Soviet-style takeover
By Uriel Heilman 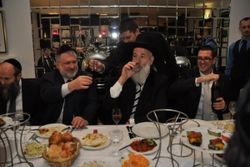 BERLIN (JTA) -- Two Jewish billionaires who came to Berlin from Ukraine last week for a conference on European Jewish life skipped out on the gathering during a session on the global financial crisis.

Instead they were downing vodka shots with Israel’s chief rabbi in the basement of Berlin’s gleaming Chabad center.

One of the two billionaires, banking magnate Igor Kolomoisky, who with $2 billion in assets ranks No. 488 on Forbes magazine’s 2010 list of the world’s richest people, had just been named the new president of the host organization, the European Council of Jewish Communities. He was awarded the position after committing to give the organization an annual multimillion-euro gift for five years -- at least $14 million.

Depending on whom one talked to, the appointment was either a generous lifeline to a cash-strapped organization focused on social welfare and education or a hostile takeover of a group with an important-sounding name.

The problem was that Kolomoisky had not been elected but appointed unilaterally by the organization’s outgoing president, Jonathan Joseph, who had met Kolomoisky for the first time earlier that day. Joseph defended his sudden decision as justified by the size of Kolomoisky’s gift -- and by the need to respond to a man who might not be inclined to wait for an official vote from the board of directors.

The appointment was celebrated with a dinner of foie gras and braised duck for some 150 people at Berlin’s swankiest hotel, the Adlon -- paid for by Kolomoisky, according to Joseph.

But the few board members from the social welfare organization who were present at the dinner found the turn of events jarring.

“This is not a democratic process,” Arturo Tedeschi, an EJCJ board member from Italy, told JTA. “It took place like a Soviet-style takeover.”

Tedeschi and four other board members subsequently resigned. Days later the Italian Union of Jewish Communities withdrew from ECJC.

It wasn’t just the undemocratic nature of the appointment that rankled board members and raised eyebrows here. The appointment also touched the nerve of East-West tensions simmering just beneath the surface of European Jewish life.

For decades, Eastern European and Russian Jewish communities were beneficiaries of the West’s largesse, and in the early years of post-Communist life they were rebuilt by American, Israeli and Western European Jews who did everything from pay for their meals to show them how to pray in synagogue.

Now, two decades since the fall of communism and with Western Jewish institutions mired in financial woes, Jews from the former Soviet Union -- oligarchs who made their fortunes as capitalism emerged from the Soviet collapse -- are swooping in to take over the leadership of several key European Jewish organizations.

Some view this as a positive development, a rescue from the East. While Western Jewish donors are tired and overextended, the philanthropists from the East are energetic and looking to give, Joseph said.

“They may dress funny and drink too much, but they’re sharp,” Joseph said. “They haven’t been rubbed down and made dull yet.”

Others view the changes more ominously, questioning the motives of the philanthropists from the East -- businessmen for whom political connections come in handy.

“Now they have a little toy with which they can go around and say this is the opinion of European Jews,” said Bianca Tedeschi, who came to the conference from Italy with her husband, Arturo. “It’s very scary.”

“His reputation, which we checked out, is a very, very good one,” Joseph said. “Yes, he has commercial disputes, but so does every businessman. His integrity is excellent.”

The ECJC is hardly the first such organization to become the pet project of a Russian-speaking oligarch.

In 2007, computer and agrochemical giant Moshe Kantor, No. 773 on the Forbes list with a net worth of $1.3 billion, was elected president of the European Jewish Congress. Alexander Mashkevitch, a Kazakh who has appeared on Forbes’ lists and is in the metals and gas businesses, heads the Euro-Asian Jewish Congress. Ukrainian Vadim Rabinovitch, another oligarch and media mogul, is a vice president of the ECJC.

But while Prokhorov’s purchase of the Nets was widely applauded (the basketball team, which last year nearly compiled the worst record in NBA history, could use some cash and a change of direction), the infusion of Easterners into Western Jewish organizations has not been universally cheered.

“We will not be colonized by a Ukrainian, that’s for sure,” one ECJC board member said at the parley in Berlin.

East-West tensions were evident throughout the conference, which drew not only Jewish organizational leaders from throughout Europe but several Israeli officials -- including Education Minister Gidon Sa’ar and Ashkenazi Chief Rabbi Yona Metzger -- and the executive vice-president of the Conference of Presidents of Major American Jewish Organizations, Malcolm Hoenlein.

The East-West resentment runs both ways -- something Rabinovitch, the other oligarch who was pouring vodka shots at Chabad in Berlin -- acknowledged in a speech at the conference.

“Sometimes we look at each other and we seem to be afraid of each other,” Rabinovitch said of Eastern and Western European Jews at the session, to which he showed up clad in jeans, a long-sleeved T-shirt and a baseball cap (everyone else wore jackets and ties). “We’re now more active. We’re really taking steps forward.”

Many in the East view Western Europeans as timid and ineffectual, unwilling to stand up unabashedly for Israel and against anti-Semitism. Lamenting that fact, Rabinovitch recalled how, in Ukraine, “We found anti-Semitic organizations and terminated them.”

“It’s different in Western Europe -- there are legal problems," Rabinovitch said. "In the East, all our anti-Semites sit in prison.”

Eastern European Jewish officials also complain of a paternalistic attitude from the West that’s no longer appropriate now that Eastern Jewish communities have come into their own after decades of communist suppression of Jewish life.

“We’re ready to be an integrated part of the international Jewish community,” said Dmitry Maryasis, director of the Moscow office of the Euro-Asian Jewish Congress.

In Western Europe, however, the emerging Jewish leaders from the East often are seen as uncultured, undignified and of questionable backgrounds. Some Jewish oligarchs have been arrested or linked with shady business dealings.

Leonid Nevzlin, a billionaire who once managed Russia’s largest energy company, Yukos, and is now a major Jewish philanthropist living in Israel, was convicted in 2008 by a Russian court of organizing five murders. Nevzlin, in absentia, dismissed the judgment as a politically motivated farce.

In one widely discussed incident, Kantor reportedly presented German Chancellor Angela Merkel with a bar of soap when they met several years ago to remind her of what the Nazis did to their Jewish victims as they were ushered into the gas chambers.

“They’re like loose canons; they’re not really answerable to anyone,” said Susy Stone, who came to the ECJC conference from London. “The Jewish community needs a little more levelheadedness.”

Many of these oligarchs became fabulously wealthy through special deals made with Vladimir Putin and brokered through Chabad. Pro-democracy oligarchs were persecuted and hounded, and the Jewish organizations they backed were marginalized by Putin, which led to Chabad's dominance over Russia's Jewish community and the Jewish communities of several former Soviet republics.

You can read about that here and, to a lesser extent, here.

Two Jewish billionaires who came to Berlin from Ukraine last week for a conference on European Jewish life skipped out on the gathering during a session on the global financial crisis. Instead they were downing vodka shots with Israel’s chief rabbi in the basement of Berlin’s gleaming Chabad center.