« Horrific Haredi Child Abuser Guilty On All Counts | Main | Was The Original Popularity Of Both The Hasidic Movement And Kabbalists Based On Exorcism? » 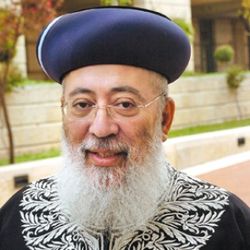 Chief Spehardic Rabbi Shlomo Amar has called on Prime Minister Benjamin Netanyahu to torpedo a bill stating that Israel will automatically approve conversions carried out by the Israel Defense Forces without necessitating the chief rabbi's signature, which was approved on Sunday by the Ministerial Committee on Legislative Affairs.

In a talk he held with Netanyahu over the weekend, and in a letter he sent to him Monday morning, Rabbi Amar claimed that the proposal made by Knesset Members David Rotem and Robert Ilatov (Yisrael Beiteinu) would have "severe consequences in the future".

He asked that the government wait for the conclusions of the committee established by the Chief Rabbinate to investigate the crisis surrounding the legal and halachic validity of the IDF conversions before moving forward with the legislation.

"I am emphatically against this bull which shows contempt for the converting soldiers by separating them from the rest of the nation", Rabbi Amar explained and added "and there are many more reasons which are just as important."

Rabbi Amar stressed that he didn't mean to perpetuate the adversity of those who have gone through the IDF conversion process, whose personal status remains unclear, and highlighted that: "I raised this issue before the Council of Israel's Chief Rabbinate after a great deal of consideration and that led to the establishment of a committee, sadly, some of the committee members have now resigned."

Rabbi Amar added that he appealed to the president of the Rabbinate Council, Chief Rabbi Yona Metzger so that he can continue the management of the issue, "I hope that the committee's work will be completed successfully and in the right way in the near future."

The Shas party presented an appeal over the ministerial committee's decision. The committee has now sent the bill to the Knesset for a preliminary hearing. Minister Meshulam Nahari (Shas) demanded that the issue be discussed before the government plenum. "The problem of those that have gone through IDF conversions is well known but it can't wait", he said.