Who Is The Man In The Black Fedora?

Only one ultra-Orthodox fixer appears to have accompanied New York gubernatorial hopeful Andrew Cuomo on all four of his early October visits to Brooklyn’s Hasidic rebbes. Who is he? 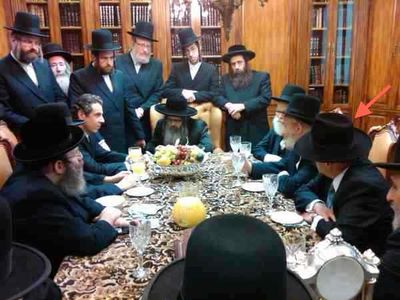 Who’s That Guy in the Black Hat Next to Cuomo?
By Josh Nathan-Kazis • The Forward

Only one ultra-Orthodox fixer appears to have accompanied New York gubernatorial hopeful Andrew Cuomo on all four of his early October visits to Brooklyn’s Hasidic rebbes.

So who is this Zelig? Turns out his name is Abraham Eisner, an Orthodox businessman and a relative newcomer to the ultra-Orthodox political scene.

“He’s a very prominent communal and business leader who is very well respected in all segments of the Orthodox community, and Cuomo wisely reached out to him to help structure [his] Jewish outreach effort,” said Ezra Friedlander, a public relations consultant specializing in the ultra-Orthodox world.

Eisner’s role in orchestrating the meetings between Cuomo and the rebbes is unclear. A spokesman for the Cuomo campaign said that while he had been involved in arranging the meetings, the point person was Rabbi David Niederman, head of the Satmar-affiliated United Jewish Organizations of Williamsburg.

Niederman acknowledged arranging the meetings with the Pupa rebbe and Zalman Teitelbaum, but said that he had not arranged the meeting with Aaron Teitelbaum. Eisner declined to comment.

Beyond the meetings with the rebbes, Eisner was also a key organizer, along with New York State Assemblyman Dov Hikind and Friedlander, of a September 20 press conference on the steps of New York City’s City Hall when Jewish leaders and elected officials slammed Republican gubernatorial nominee Carl Paladino for calling New York State Assembly president Sheldon Silver an anti-Christ.

According to Friedlander and others, this marks Eisner’s first foray into the business of connecting political hopefuls with the ultra-Orthodox leadership. “Although he’s not a professional and seasoned politico, sometimes that brings a fresh perspective to political relationships with the community,” Friedlander said.

Eisner is the chief executive officer of GFI Mortgage Bankers, a division of GFI Capital Resources Group, a New York-based financial services company. In 1997, Eisner was quoted in a New York Times story extolling what was then a new innovation – “no-doc” mortgages. “No-doc means all we need is your name, address and Social Security number, depending on your credit history,” Eisner said at the time. According to the story, subprime mortgages accounted for 25% of GFI Mortgage Bankers’ loans in 1997, up from 10% in 1995.

There are no indications as to whether that trend continued at the company or whether the company played a part in the larger subprime mortgage crisis that rocked the nation’s economy in 2008.

Eisner’s family foundation, the Eisner Charitable Foundation, had assets worth $618,206 in 2007. He is the president of the board of directors of the HASC Center, an Orthodox social service group for the developmentally disabled.

Who Is The Man In The Black Fedora?

Only one ultra-Orthodox fixer appears to have accompanied New York gubernatorial hopeful Andrew Cuomo on all four of his early October visits to Brooklyn’s Hasidic rebbes. Who is he?