Andrew Cuomo goes to visit Satmar leaders and unknowingly ends up in a photo op with a hasid forced to repay millions of dollars scammed from Medicare and a State Assemblyman under Federal and State investigation for charities fraud.

Here's what Goldberger did:

Attorney General Andrew M. Cuomo and U.S. Attorney Benton J. Campbell today announced a settlement with three home health agencies resolving Cuomo’s lawsuit against one of them and three whistleblower lawsuits that alleged the agencies defrauded the Medicaid program. This is the largest settlement Cuomo’s Medicaid Fraud Control Unit has reached with the home health industry in New York State.

The settlement arises from the agencies’ use of hundreds of home health aides who had received little or no required training. The agencies sent these aides daily into the homes of New York’s elderly, frail and indigent to provide sensitive medical care. As a result, these aides caused Medicaid to be billed for millions of dollars for services they were not qualified to provide.

Under the terms of the settlement, B&H Health Care Services, Inc., known as Nursing Personnel Home Care (“Nursing Personnel”), a Brooklyn-based licensed home care service agency, along with Excellent Home Care Services, LLC (“Excellent”) of Brooklyn, and Extended Nursing Personnel CHHA, LLC (“Extended”) of Manhattan, both certified home health agencies, will return $23,963,100 to Medicaid, a program jointly funded by the state and federal governments. Of this amount, the State of New York will receive a total of $14,377,860.

Here's a statement from a Cumo campaign source who says Satmar, not Cuomo, invited the participants:

"We did not invite him -- there were dozens of people at each event and the Attorney General would not have known who he was. We can't run background checks on everyone who shakes the candidate's hand on the campaign trail. He was not involved in the coordination of any event. Invitations to community members were done by the community leaders."

Since Cuomo was meeting with one of the two Satmar rebbes, this means the Satmar Rebbe actually approved of inviting Goldberger to the meeting.

Vito Lopez, the State Assemblyman currently under State and Federal investigation, was also apparently invited by the rebbe.

Here are some pics of the meeting, courtesy of Mark Mayer Appel: 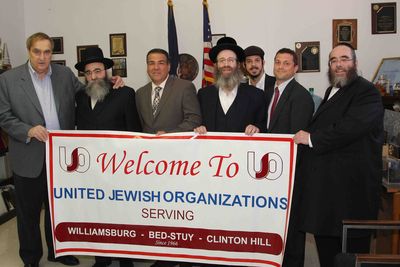 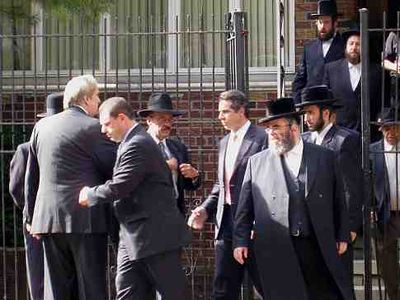 And here is another from Kol Satmar: 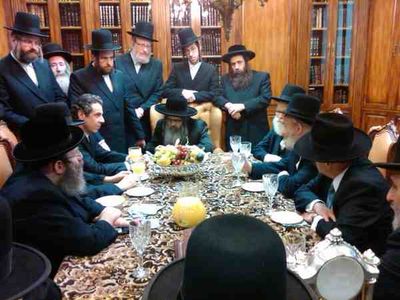 Andrew Cuomo goes to visit Satmar leaders and unknowingly ends up in a photo op with a hasid forced to repay millions of dollars scammed from Medicare and a State Assemblyman under Federal and State investigation for charities fraud.