The decision to stop using kosher slaughtered beef was prompted by media stories that halal meat was being used without the knowledge of the public by some McDonald's restaurants. 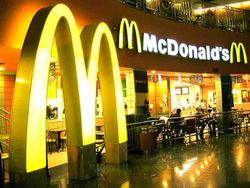 Kosher consumers suffered a double blow this week when a major abattoir in Ireland closed its kosher facility and a second in the north of England temporarily suspended operations.

Rory Fanning, managing director of Slaney Foods, in County Wexford, which supplies the London Board for Shechita (LBS), said: "We have made the decision not to have religious slaughter."

He said the decision was prompted by media stories that halal meat was being used without the knowledge of the public by some McDonald's restaurants. McDonald's denied this as it was against its policy to use religiously slaughtered meat.

But the company checked its suppliers and was forced into a u-turn, admitting that one abattoir had used halal meat for some chicken products.

A spokesman said all suppliers were asked to "reiterate that their meat was not slaughtered in that way". One of them was Slaney, which had worked with McDonald's for eight years, predating its relationship with kosher meat.

Suddenly, at the end of last week Slaney announced its decision to end religious slaughter. Rumours, since denied, were rife in London, where most of Slaney's meat was delivered, that McDonald's had given it an ultimatum to stop the kosher part of its business or risk losing it as a customer.

Slaney's managing director Rory Fanning said: "It's not that we are doing it because someone was influencing us outside the company. We made the decision ourselves.

"There has been a lot of media coverage of ritual slaughter, and it was in the context of that, that the decision was made. I'm not saying it's the right decision. I am very hesitant."

Mr Fanning conceded that there had been no discussion with the LBS before Slaney announced its decision to stop allowing shechitah at its abattoir.

McDonald's said: "While kosher meat is outside McDonald's UK specification, we understand the importance of it to some customers as well as UK and Irish agriculture.

"If Slaney has stopped producing kosher meat as a result of our non-specification then there has been a misunderstanding. Our supply chain is in discussion with the Slaney abattoir to ensure they can continue to produce kosher meat separately to their production of traceable, non-kosher meat for McDonald's UK."

A spokesman for the LBS said: "We are very concerned and we are monitoring the situation on a daily basis."

He said that Dayan Yisroel Lichtenstein, of the Federation of Synagogues' Beth Din, had gone to Europe to find alternative supplies. "There will not be a shortage of meat in the UK, " he added.

But Jacky Lipowicz, chair of the Kosher Licensed Butchers' Association, said: "Shechitah is under threat once again. The constant harassment of shechitah has led to this situation. "

The English abbatoir which shut down its shechitah operations was in Oldham.

He said: "We've done all the lamb as normal and actually did a bit extra. Some people will be short of beef, but the shortfall will be made up by Friday."

Staff at Menachem's butcher's shop in Golders Green said ordinary beef stocks had halved due to halted deliveries. One said: "We've got two batmitzvahs to do this week and I've got nothing to cook or prepare."

Edgware butcher Elaine Mann said her beef reserve ran out after the High Holy Days, but added: "We are trying to buy as much as we can to replenish stocks. At the moment there is enough meat to go around."

In North America, meat sold to McDonald's and many other fast food restaurants must come from plants that pass a very specific humane slaughter audit.

The problem in the UK mirrors the problem haredi-run kosher slaughter plants have in North America and South America.

Haredim – usually hasidim like Rubashkin – often refuse to cooperate, even though what is being asked of them in no way compromises kosher slaughter or halakha.

But many haredim still refuse, arguing that any cooperation will fuel more "attacks" on shechita.

Ironically, this is similar logic to what many non-hasidic Orthodox Jews used to reject a new type of shechita knife at the time of the Ba'al Shem Tov. The Ba'al Shem Tov backed the new knife because it was sharper than the old and therefore reduced the animals' suffering.

So what happened to that new type of knife?

It's the knife we all use today.

I think a similar thing will happen with humane slaughter improvements Temple Grandin and others promote.

But it will take time, and during that time shechita will be threatened. But those threats will largely be self-inflicted.

Posted at 02:36 AM in Haredim, Kosher Scandal | Permalink

The decision to stop using kosher slaughtered beef was prompted by media stories that halal meat was being used without the knowledge of the public by some McDonald's restaurants.