Village attorney Ryan Karben got fired today and got a police escort out of Village Hall. 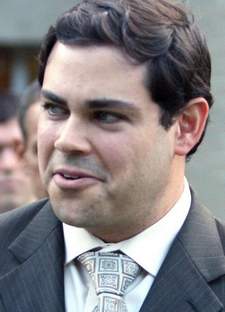 SPRING VALLEY — Village attorney Ryan Karben got fired today and got a police escort out of Village Hall.

Why Mayor Noramie Jasmin dismissed Karben was not made available this afternoon as Jasmin didn't return several telephone calls for comment. The decision seemed related to his work for the village.

Police said Karben got escorted from the building after being relieved of his duties. Police said they were not made privy to why Karben was fired.

Trustee Demeza Delhomme said Jasmin told him that Karben had been escorted from Village Hall.

"The mayor told me there was an incident," Delhomme said. "She didn't explain it to me. I have no idea what happened. The mayor has the right to bring people in and take out people."

Karben, 36, had meteoric rise in politics, starting as a youngster working on political campaigns in Ramapo with his parents.

He served on the Ramapo Planning Board before being elected to the Rockland Legislature and the state Assembly.

Karben resigned from the Assembly in May 2006, amid allegations of improper behavior with interns in Albany. He's never addressed the accusations, other than to contend he resigned to spend more time with his wife and daughters.

Karben pleaded guilty to driving while impaired by alcohol in December 2008 and served a night in jail on a two-day sentence.

Village attorney Ryan Karben got fired today and got a police escort out of Village Hall.