It's not every day that an ultra-Orthodox Jew gets a personal letter from a Playboy cover girl, but in this case there's a perfectly good explanation. 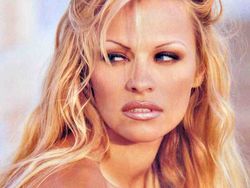 Well, it's not every day that an ultra-Orthodox Jew gets a personal letter from a Playboy cover girl, but in this case there's a perfectly good explanation.

Pamela Anderson, expected to descend on Israel in full glory next week for the new season of the local version of "Dancing With the Stars," is joining the local move to ban fur.

On paper, passing such a bill shouldn't be very hard in Israel, with its hot climate, seriously informal dress code and teeny fur trade. And nearly 80% of the people support the initiative, according to public opinion polls. But when presented last year, the proposed legislation hit an unexpected snag: ultra-Orthodox Jews.

Specifically, their shtreimels. Common among ultra-Orthodox Jews of European descent, the shtreimel -- a hat trimmed with fur -- is worn mostly by married men on the Sabbath, Jewish holidays and festive occasions. Style and other nuances disclose their affiliation, sometimes social and financial standing too.

Some are imported, others manufactured locally using imported fur. Only about 10,000 are made annually worldwide, says one Jerusalem craftsman, and they sell for about $4,000.

"Oy vey, you will be sending thousands of haredim to jail!" lawmaker Menachem Eliezer Moses of the United Torah Judaism faction is said to have exclaimed last year  upon seeing the bill that called for a one-year jail sentence for violators.

The law has sputtered for over a year now, undergoing various incarnations. The original proposal sought to ban the use of fur from cats and dogs. Later expanded to include other furs imported or incorporated into textile, the bill did allow for certain religious use.

It looked like common ground was reached on the matter, and activists were excited about the final push toward a bill that would make Israel a fur-free forerunner. But when it came up for a vote in September, it was stonewalled. The minister of religious services, Yakov Margi, postponed the discussion and asked for time to study possible implications that hadn't been considered, and Moses backed out of previous agreements. Lawmaker Ronit Tirosh, coauthor of the bill, was furious; local and international activists were dismayed. "Ban on fur trade in Israel frozen via dirty politics," was the title of the international anti-fur coalition's report.

In the letter she sent this week , Pamela Anderson urged Minister Margi (of the Sephardic religious party Shas) to support the historic bill. She linked to a PETA video. Even a few seconds would be enough for him to agree that the way the animals suffer and die in the fur trade violates Jewish principles, which prohibit unnecessary suffering to animals, she wrote (that's probably a better approach in this case than this one).

The fur-trimmed hat is a centuries-old custom but not a religious obligation. According to some manufacturers, the fur comes from the scrap of the fur trade, meaning animals that have already been killed for the big industry.

Margi isn't the first Israeli minister to be approached by an iconic blond on the subject. This summer, Industry, Trade and Labor Minister Binyamin Ben-Eliezer received a letter from Brigitte Bardot, who asked him to do the right thing and give Israel the chance to be "a light unto the nations." Ben-Eliezer had expressed concern that the law would violate some of Israel's trade agreements with other countries. 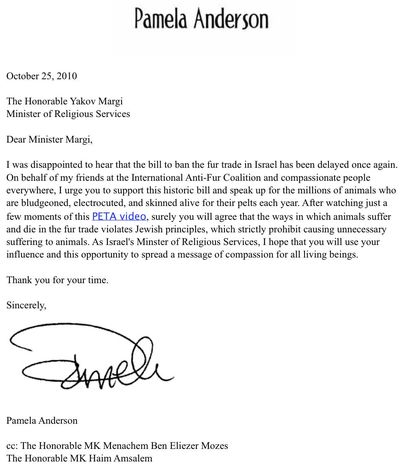 Posted at 06:30 AM in Haredim, Israel, Kosher Scandal | Permalink

It's not every day that an ultra-Orthodox Jew gets a personal letter from a Playboy cover girl, but in this case there's a perfectly good explanation.