"If textbooks state explicitly that human beings' origins are to be found with monkeys, I would want students to pursue and grapple with other opinions. There are many people who don't believe the evolutionary account is correct." 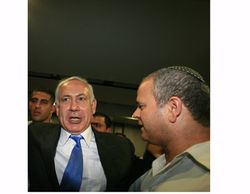 The Education Ministry's chief scientist, Dr. Gavriel Avital, was dismissed on Monday following a scandal-filled trial period of less than a year.

Sources familiar with the affair said Avital was fired over past statements he had made, in which he questioned evolution and the global warming theory.

Avital, who was named chief scientist in December 2009, said Darwinism should be analyzed critically along with biblical creationism.

"If textbooks state explicitly that human beings' origins are to be found with monkeys, I would want students to pursue and grapple with other opinions. There are many people who don't believe the evolutionary account is correct," he said.

"There are those for whom evolution is a religion and are unwilling to hear about anything else. Part of my responsibility, in light of my position with the Education Ministry, is to examine textbooks and curricula,"

Avital added, "If they keep writing in textbooks that the Earth is growing warmer because of carbon dioxide emissions, I'll insist that isn't the case."

His comments sparked a public uproar, with many environmentalists and scholars calling for his dismissal.

Avital told Ynet Education Minister Gideon Sa'ar fired him "because of an interview I gave to the press, not because I didn’t do my job well."

"In the interview I expressed my opinion on evolution, science and literature – there was no negative response to the interview, only good feedback," he said. "The minister thought I should not have granted the interview."

Avital called the dismissal "excessive" and said, "I did many things in the field of research, and the result of this work will be revealed soon."

Addressing his comments against environmental groups, Avital said in articles he had published he claimed that there is "no scientific connection between global warming and human activity. It has never been scientifically proven that climate change is the result of carbon-dioxide emissions."

"The minister who appointed me was aware of my opinions," he added.

Evolution 101: Man is not descended from monkeys. Man shares a common ancestor with all apes.

Global Warming / Climate Change 101: Carbon gasses produced by buring fossil fuels does impact our climate. There are debates over how great this impact is, with the vast majority of scientists accepting models that show the impact to be serious.

The Prime Minister – who received an Ivy League education and whose father is a well known academic – should have known all that.

"If textbooks state explicitly that human beings' origins are to be found with monkeys, I would want students to pursue and grapple with other opinions. There are many people who don't believe the evolutionary account is correct."