(CNS) – Philanthropist Roland Arnall may have talked about making a pledge to Chabad of California Inc. about donating money for an educational center, but never committed himself to it, an attorney for the late billionaire told a judge today.

John S. Gordon, who represents Arnall's widow, said she and her husband's estate should not be held liable for the nearty $18 million Chabad is seeking. 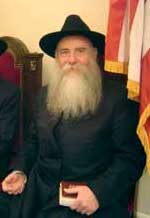 Chabad of California's founder and president, Rabbi Boruch Shlomo Cunin, maintains Arnall made the pledge to him twice before he died of cancer in March 2008 at age 68.

Today was the second day of final arguments in the non-jury trial. On Wednesday, Chabad attorney Marshall B. Grossman told Murphy that Chabad spent more than $800,000 in planning costs for the project in reliance upon Roland Arnall's pledge.

He also said the organization's leaders would have sold the property on which the center was to be built if they knew the money was not forthcoming.

The real estate market since went sour, the attorney said.

According to Dawn Arnall, her husband never mentioned making such a pledge among the many they made as a couple to both Jewish and non-Jewish organizations. She said their largest single contribution was $10 million to the Simon Wiesenthal Center, which her husband co-founded, toward construction of a a museum of tolerance in Jerusalem.

Gordon told Murphy that the Arnalls always talked with each other about their charitable donations.

"Roland had no reason to hide from Dawn any pledge he promised to Chabad,' Gordon said. ``He always discussed them with her beforehand.'

Grossman maintains that Dawn Arnall's testimony was contradicted by e-mails she exchanged in 2006 with a personal assistant to her husband that demonstrated she was aware of the $18 million promise.

But Gordon said Dawn Arnall does not remember reading about the project in any e-mails. He also repeatedly criticized what he said were insinuations by Chabad lawyers that his client lied in her testimony, saying he had refrained from casting Cunin's statements in the same light.

Cunin testified Roland Arnall made verbal promises to him in 2004 and 2008 to donate at least $18 million to Chabad to build what was to be called the Arnall Family Center.

Roland Arnall made his fortune by helping to create Orange County-based Ameriquest Mortgage in 1979 and later became embroiled in problems associated with the subprime market meltdown. Grossman said the Arnalls paid $325 million to settle actions brought against the company in 49 states.

Roland Arnall was ambassador to the Netherlands under President George W. Bush from March 2006 to March 2008, leaving the post to be closer to his cancer-stricken adult son from his previous marriage, Daniel Arnall, his widow said.

Westwood-based Chabad is seeking $17.5 million, which the organization claims is the balance due on the $18 million pledge after three payments of $180,000 were previously made by Roland Arnall.