« Haredi Rabbinate: If You Want To Get Married, Prove Your Grandmother Really Is A Holocaust Survivor | Main | 7 University Students Detained By Police As Hundreds More Protest Government Stipends For Haredi Yeshiva Students »

A Hasidic father of seven was charged Tuesday with plotting to kill a business associate with an overdose of sleeping pills in his coffee. Update 1-20-11 – the charges were dropped. 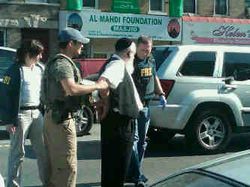 A Hasidic father of seven was charged Tuesday with plotting to kill a business associate with an overdose of sleeping pills in his coffee.

Jacob Vizel, 54, was the beneficiary of a life insurance policy for the intended victim and had been making payments for several years, according to court papers filed yesterday in Brooklyn Federal Court.

"I'm tired of paying," Vizel told an informant who was secretly taping the conversation for the FBI.

Assistant U.S. Attorney Elizabeth Geddes said the defendant had been the target of a $12 million mortgage fraud when investigators recently learned of the murder-for-hire scheme from the informant.

The informant, wearing a hidden wire, taped several conversations this month with Vizel discussing how to get rid of the man, identified in court papers only as Joey.

Vizel said a man he knew had offered to kill Joey for money. "[H]e tells me, 'Give me $500 and I'll leave him in the basement'.... He choke him," Vizel said, according to the complaint.

Later Vizel mentioned that Joey used sleeping pills and suggested a different plan of attack. "When you want to bring him for coffee, you tell me and I give [sleeping pills] to you," Vizel said. "Insurance not going to do nothing. He took his own tablet."

The complaint said Vizel offered to pay the informant for putting the sleeping pills in the victim's coffee.

Vizel, an Israeli citizen who has lived in Brooklyn for 25 years, was ordered held without bail.

He has not yet been charged in the mortgage fraud scheme.

Update 1-20-11 – VIN is reporting that the charges against Vizel have been dropped.

A Hasidic father of seven was charged Tuesday with plotting to kill a business associate with an overdose of sleeping pills in his coffee. Update 1-20-11 – the charges were dropped.