Zev Levi is wanted on immigration and identity theft-related charges. 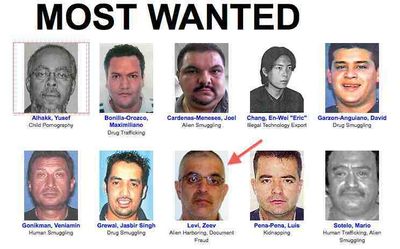 Ze'ev Levi is wanted by ICE and Homeland Security for harboring illegal aliens for profit and for telling those illegal aliens to get fake documents and is on Immigration and Customs Enforcement's Ten Most Wanted list.

His last known residence is in Nahariya, Israel.

He fled to Israel in 2008 to escape arrest, as did Hosam Amara, another Rubashkin supervisor who is wanted on extensive charges, many related to extorting the illegal workers he supervised.

Amara's flight was encouraged by and paid for by Sholom Rubashkin.

He is not on the ICE Ten Most Wanted List.

Zev Levi is wanted on immigration and identity theft-related charges.