Five senior rabbis will investigate IDF and civilian conversions and present their findings to Sephardi Chief Rabbi Shlomo Amar and the chief rabbi of the IDF within four months to resolve doubt over the validity of army conversions. 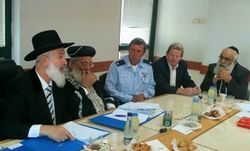 The Chief Rabbinical Council on Thursday formed a committee to examine the conversion processes not only in the IDF but also in the State Conversion Authority.

The council’s decision came after questions regarding the validity of IDF conversions arose during a September court hearing on a petition by Itim – The Jewish Life Information Center – against the Chief Rabbinate and four city rabbis who in their capacity as marriage registrars do not recognize the validity of the conversions.

During the hearing, state representative Yochi Gnessin told the High Court of Justice that there was “a problem” with the army conversions. Gnessin was not referring to a halachic problem, rather a procedural one, but the statement brought the Knesset’s State Control Committee to call on the rabbinate to issue an announcement to “clear the mist” over the military conversions.

Amar accordingly wrote in mid-September that “For years... the chief military rabbis acted in full cooperation with the chief rabbis of Israel, in all matters pertaining to religion and state. Soldiers who converted in these conversion courts, were also wed in keeping with the Halacha for many years by marriage registrars, in accordance with all religious standards.”

The chief rabbi would “even raise the issue before the Chief Rabbinical Council,” the letter said.

In the time between Amar statement and Thursday’s council meeting, the Ashkenazi haredi press produced many statements and articles attacking the validity of the military conversions, with Yated Ne’eman spearheading the claims against the IDF’s “fake” conversion industry.

Thursday’s decision was taken because the “problem” with army conversions lies in the fact that despite the law requiring the signature of the chief rabbi in charge of the rabbinic courts (currently Amar) on every conversion certificate, such a signature was never provided for the military conversions. To fix this would demand Amar’s retroactive approval, but the chief rabbi cannot do that without conducting an examination of the system he is asked to okay.

Sources in the rabbinate who attended the closed council meeting said Peretz agreed with the claims that have surfaced in haredi papers in the past few weeks, according to which the content of some of the military conversion classes contained “heretic material,” and welcomed a inspection into the mechanism.

The signature issue, however, does not explain why the rabbinical council committee would also examine the State Conversion Authority, where the chief rabbi’s signature is provided at the end of the conversion processes.

The Reform and Masorti movements slammed the rabbinate for Thursday’s decision, and Kadima called on the rabbinate to find any possible way to ease the path of those seeking to join the Jewish nation.

Rabbi Seth Farber, the head of ITIM, expressed disappointment over the decision, and his expectation of “the Chief Rabbinical Council to act in a statesmanlike manner, and not to succumb to pressure applied by wheelers and dealers who misinform the senior haredi rabbis.

“All of the IDF conversions are conducted with full acceptance of mitzvot, and adhere to all of the necessary halachic criteria,” Farber said. “These wheelers and dealers consider themselves stringent, but in fact are transgressing the explicit halachas regarding tormenting converts. The Chief Rabbinate, which is responsible for the fate of the converts, must come out with a clear and irrevocable statement that removes any shadows of doubt from the military conversions, and not form committees that will continue the torment of converts.”

MK David Rotem (Israel Beiteinu), whose efforts to pass a law aimed at making the Orthodox conversion process more accessible failed in the last Knesset session, was furious at the council’s decision.

“The very existence of a Rabbinical Council hearing on the topic is a scandal that proves there are rabbis who do not understand the importance of conversion. The IDF conversions are in full accordance with Halacha, and have been going on for years. The fact that there are people pressuring rabbis raises the notion that it would be a good idea to dissolve the Chief Rabbinical Council,” Rotem said, adding that he would promote legislation to that end.

In an address later Thursday evening, at an event in honor of outgoing director of the rabbinical courts Rabbi Eliyahu Ben-Dahan, Rotem distinguished between the chief Sephardi rabbi and the Chief Rabbinical Council regarding the decision.

“Whoever dares to doubt the validity of the conversions that that took place for 20 years in the IDF does not understand his position and should resign,” Rotem said. “Amar is in a difficult battle, but he is alone, surrounded by people who are not helping him.”

Rotem later reiterated that in his opinion, the decision was reached against Amar’s will.

In response to Rotem’s claim, a source within the Rabbinical Council said that in Thursday’s meeting, Amar claimed that in his letter he was not taking a stance, merely trying to calm the situation down.

Five senior rabbis will investigate IDF and civilian conversions and present their findings to Sephardi Chief Rabbi Shlomo Amar and the chief rabbi of the IDF within four months to resolve doubt over the validity of army conversions.