The English Defence League (EDL) rallied outside the Israeli embassy with Orthodox Rabbi Nachum Shifren from L.A. The Israelis opposed the rally as did most of England's Jewish community.

But the opposition of Great Britain's Jewish community and the Israeli government did not stop Rabbi Nachum Shifren, formerly a member of Rabbi Meir Kahane's entourage and a Kfar Chabad-educated rabbi, from speaking at the rally:

EDL rally with Rabbi Nachum Shifren
The English Defence League (EDL) rallied outside the Israeli embassy with Orthodox Rabbi Nachum Shifren from L.A. The hope is that a connection will be forged between the EDL and the Tea Party in America.
Demotix.com

Orthodox Rabbi Nachum Shifren is a candidate for a Seat in the California Senate in District 26 in West Los Angeles. He has spoken at Tea Party and Republican Conventions in America.

According to an interview he gave with the Guardian, "The Jewish community is paralyzed with fear, exactly what most radical Muslim agitators want. The people of England are in the forefront of this war – and it is a war. One of the purposes of this visit is to put the kibosh on the notion in the Jewish community that they cannot co-operate with the EDL, which is rubbish." 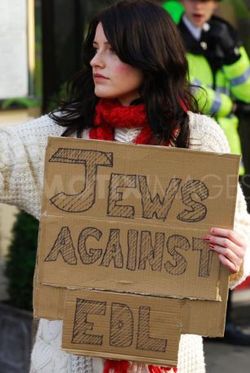 The rally today was met with a small counter protest from Unite Against Fascism (UAF) and others.

Police were restricting freedom of the press until members demanded they were allowed to get on with their jobs.

Before the Rabbi spoke a mole within the EDL pulled the plug on their speaker system, causing a few to chase after the suspect.

There were a few attempts by the EDL to break the police cordons but they were met with many police who began to search a handful of those posing threats to the public or the press.

Following the embassy rally, many descended The Gloucester Arms, before walking through the park to Speakers corner. Here there were small scuffles with Muslims in the area. One group of Muslims even had there table and literature thrown over a fence by two EDL members. After this police moved in with force, assaulting not only EDL but the press.

The Rabbi spoke in Speakers Corner where there was a large counter gathering of Muslims who were already in the area. One Muslim heckler shouted out, "If you hate Muslims why do you look like Bin Laden? The Rabbi replied, "when we get control of this country, I'll make sure that your ass is out of here." He went on to say that he was there as a member of the Tea Party.

Once police regained control of the situation the EDL were slowly marched to Hyde Park Corner.

The English Defence League (EDL) rallied outside the Israeli embassy with Orthodox Rabbi Nachum Shifren from L.A. The Israelis opposed the rally as did most of England's Jewish community.