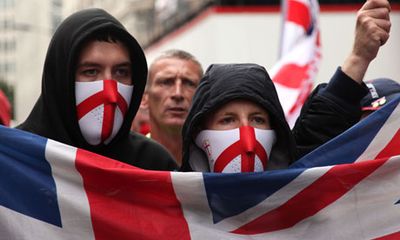 Please watch this Guardian news video to see English Defense League skinheads hurl racist slurs and threaten violence. It will shock you. You can see some of them making Nazi salutes in a pub and glorifying violence. One refers to anti-fascist protesters as "niggers" and "Pakis."

Then read the Guardian's article posted below.
Schrifen is also a Tea Party state senatorial candidate in California and is Chabad's "Surfing Rabbi."
The Guardian's report:

English Defence League forges links with America's Tea Party
As the far-right group marches in Leicester, details are emerging of growing contacts with extremist US groups in a 'war on Islamification"
Mark Townsend • The Guardian

The English Defence League, a far-right grouping aimed at combating the "Islamification" of British cities, has developed strong links with the American Tea Party movement.

An Observer investigation has established that the EDL has made contact with anti-jihad groups within the Tea Party organisation and has invited a senior US rabbi and Tea Party activist to London this month. Rabbi Nachum Shifren, a regular speaker at Tea Party conventions, will speak about Sharia law and also discuss funding issues.

The league has also developed links with Pamela Geller, who was influential in the protests against plans to build an Islamic cultural centre near Ground Zero. Geller, darling of the Tea Party's growing anti-Islamic wing, is advocating an alliance with the EDL. The executive director of the Stop Islamisation of America organisation, she recently met EDL leaders in New York and has defended the group's actions, despite a recent violent march in Bradford.

Geller, who denies being anti-Muslim, said in one of her blogs: "I share the EDL's goals… We need to encourage rational, reasonable groups that oppose the Islamisation of the west."

Devin Burghart, vice-president of the Kansas-based Institute for Research & Education on Human Rights, said: "Geller is acting as the bridge between the EDL and the Tea Party. She plays an important role in bringing Islamophobia into the Tea Party. Her stature has increased substantially inside the Tea Party ranks after the Ground Zero mosque controversy. She has gained a lot of credibility with that stuff."

Details of the EDL's broadening aspirations came as about 1,000 supporters yesterday gathered to demonstrate in Leicester, which has a significant Muslim population. Home secretary Theresa May banned marches in the city last week but the EDL said its protest would proceed, raising fears of violence. Parts of Leicester were cordoned off to separate a counter-protest from Unite Against Fascism. Officers from 13 forces were on hand to maintain order.

The Tea Party is expected to be an influential force in America's mid-term elections. Last month their candidate Christine O'Donnell romped to the Republican nomination in Delaware, following a stream of populist rightwing candidates who carry the movement's endorsement. Burghart says anti-Islamic tendencies have become far more marked in the grassroots organisation: "As we move farther and farther away from the Tea Party origins, that were ostensibly around debt and bail-outs, social issues like Islamophobia are replacing that anger, that vigour. The idea that there is a war between Islam and the west is becoming commonplace."

Another Tea Party-associated grouping, the International Civil Liberties Alliance, which campaigns against Sharia law, confirmed that EDL leaders have made "contacts with members of important organisations within the American counter-jihad movement". A statement said: "It seems now that America and Europe are acting as one, and united we can never fail."

With the Tea Party said to benefit from millions of dollars of funding from conservative foundations, experts warn an alliance between the EDL and extremist elements within the US movement could allow the English group to invest in wider recruitment and activism.

Shifren, a Californian senate candidate, said Britain's Jewish community should rally behind the EDL: "The Jewish community is paralysed with fear, exactly what most radical Muslim agitators want. The people of England are in the forefront of this war – and it is a war. One of the purposes of this visit is to put the kibosh on the notion in the Jewish community that they cannot co-operate with the EDL, which is rubbish."

The EDL's website relaunched briefly last week with new US links. Currently shut down for "maintenance", the site featured prominent links to a site called Atlas Shrugs, which is run by Geller, and another US-based site, Jihad Watch, which compiles negative news coverage of Islamic militancy.

In addition, two members of the EDL leadership, a British businessman called Alan Lake who is believed to fund the group and a man known by the alias Kinana, are regular contributors to web forum 4Freedoms. The forum claims to be "organising US activities" and has links to the anti-jihad group, American Congress for Truth, which in turn has supporters within the Tea Party.

Lake is also believed to have been in touch with a number of anti-Islamic Christian evangelical groups in the US. One posting by Lake on 4Freedoms warns that the UK of the future will start to fragment into Islamic enclaves. Lake, believed to be a principal bankroller of the EDL, which claims to be a peaceful, non-racist organisation, is understood to be keen on the possibility of setting up the UK equivalent of the Tea Party. At an event organised by the Taxpayers' Allliance last month, US Tea Party organisers outlined how the movement emerged last year, partly in protest at the US bank bail-out.

Those present included Freedom Works and the Cato Institute, one of the Tea Party's main backers. However, Simon Richards, director of the Gloucestershire-based Freedom Association, which is looking at developing a pseudo-Tea Party movement in the UK, said he was concerned the project could be hijacked by elements such as the EDL. Nick Lowles of anti-fascist organisation Searchlight said: "The EDL is an integral part of an international campaign against Islam. While some are fighting in a cultural and political arena, the EDL are taking it to the streets. The images of the EDL allegedly taking on Muslim fundamentalists on the streets of Britain is also delighting right wing religious organisations in US."

Chabad's "Surfing Rabbi" Nachum Shifren, a regular speaker at Tea Party conventions, will go to Britain to speak at a convention of hard right British extremists and skinheads about Sharia law. Shifren will also discuss fundraising issues.
Failed messiah was established and run in 2004 by Mr. Shmarya (Scott)Rosenberg. The site was acquired by Diversified Holdings, Feb 2016.