Ben Gurion and Hebrew Universities had the largest demonstrations, with hundreds of students at each. Smaller demonstrations also took place at Haifa University, IDC Herzliya, Sapir College, and colleges in Netanya and Kiryat Ono. After giving Prime Minister Benjamin Netanyahu a rude awakening on Wednesday morning, the students continued their protests against a bill allotting millions in state funds to yeshiva students.

At Ben-Gurion University, protestors held signs that read 'Finance and management studies not managing and financing yeshivas'. Seven students were detained by the police after blocking a highway in Beershba, including Ben Gurion-University Student Union Chairman Uri Keidar.

Students at Bar-Ilan University threatened to close route number 4 - major road near the university, but soon folded and went back to protesting on the sidewalks. They held signs reading: 'We are all equal students', 'We aren't suckers' and 'We have a yarmulke though we aren't haredim'.

The chairman of the Bar Ilan University student union, Liron Pulitzer, said: "Through these protests we are trying to get our demands for equal rights with the haredim heard. Bar Ilan's message is that you can combine religious studies with academic studies. Over the last few days we received many appeals from students, telling us that it's time to fight and change this country's priorities."

Hundreds of students also protested at the Tel Hai college – Marching from the college towards the city of Kiryat Shmona. The students carried flags and wore shirts that read: 'I'm praying for a scholarship'. 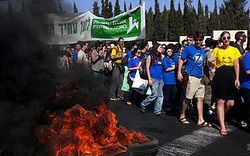 Simultaneous demonstrations took place at universities across the country as thousands of students protested against stipends for full-time yeshiva students on Wednesday afternoon. “Wake up, Bibi, students are worth more!” students chanted outside of Hebrew University as they blocked main roads and burned tires.

“We waited ten years for an answer from the Supreme Court,” said Ofri Raviv, the vice president of the Student Union at Hebrew University, referring to a legal effort launched in 2000 to examine the issue. In June, the Supreme Court ruled that stipends for haredi kollel students were discriminatory. But on Monday, the Knesset approved the first reading of the 2011-2012 budget, with the stipends for haredi students included.

“It’s been defective since the founding of the state, and the time has come to prove that this can change,” Raviv told the Post. “Pay attention, Israel, because we’re the spine of the country, not those people.”

Early Wednesday morning, 20 students from Tel Aviv University and Hebrew University demonstrated outside the prime minister’s residence in Jerusalem. They released roosters on the road to serve as a “wake up call” for the prime minister. Police at the scene took two of the protesters for questioning. A municipal worker was dispatched to catch the roosters. The police said there were no injuries to the protesters, and no additional information was available about the roosters.

“This really does touch every student, and that’s why there’s hundreds of students who aren’t apathetic, who left classes to come here,” said Yuval Admom, the president of Hebrew University’s student union. “We want to stop this disgusting law, which isn’t serving anyone and it’s not good for Israel.”

“Everyone needs to know that the students have the ability and the desire to go out into the street and show that we have electoral power, because that’s the only thing that affects Bibi,” said Tomer Dror, an activist from Hitorerut Yerushalayim (Awakening Jerusalem) who was briefly detained by police during the demonstration. “We’re not talking to Gafni [who proposed the bill to include the stipends in the budget despite the high court’s ruling], we’re talking to Bibi, because he’s the one that’s supposed to represent us in the Knesset and he’s the one that needs to stop this law.”

The National Student’s Union, which unites all of the student unions, is planning an additional demonstration on Monday evening in front of the prime minister’s residence that is expected to draw thousands of demonstrators.  Organizers are unsure whether or not there will be roosters at Monday’s protest.

Ben Gurion and Hebrew Universities had the largest demonstrations, with hundreds of students at each. Smaller demonstrations also took place at Haifa University, IDC Herzliya, Sapir College, and colleges in Netanya and Kiryat Ono.