Bat Melech provides rare support for abused religious women, addressing their particular needs as they break cycle of violence and grapple with a painful reality that is particularly taboo in their communities. 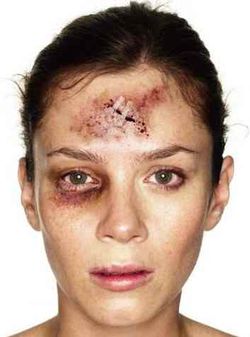 Once I realized I was about to do an article about a shelter for battered religious and haredi women, I was brimming with stereotypes. I imagined a narrow staircase leading down to a gloomy alcove lit by emergency lighting and crowded with beds, women wearing old, worn-out wigs, bruised children, and air laden with pity and desperation.

However, Rabbi Attorney Noach Korman, founder and manager of the Bat Melech organization which started the shelter, assured me I would be surprised after hearing my colorful description, I was still unprepared for the pastoral bed-and-breakfast atmosphere nestled among the citrus groves, the petting zoo, the playground, and the coffee corner. I was even more surprised when I met the women: mostly young, good looking, friendly, and intelligent – women who could be at their peak if it weren't for the difficult reality to which they had fallen victim.

I sat and spoke with them a bit. Oranit, about 20, from the north, experienced coupledom for a relatively short time during which she was degraded and beaten by her husband. She decided to escape to the shelter after he kicked her pregnant belly, nearly causing a miscarriage.

"It takes time to understand that your husband is an abusive husband. It is a notion from other people's stories, not your own personal story. Your husband is just irritable, that's all," she told me. "Until then, I was sure that I apparently deserved the blows, that I am a bad wife, that maybe I deserve it. When my parents tried to hint that there is something problematic in the way he treats me, I fought to defend him. But when he beat my stomach and hurt the baby, I understood that he is the warped one here. Tell me, what can you possibly blame a baby of?"

Today, she is fighting him on two legal fronts with the help of Bat Melech's lawyers.

'Sleeping next to your nightmare'

Tamar took a bit more time to decide to pick up and leave – nearly 10 years in which she gave birth to four children, who are currently divided between her and her ex.

"Can you imagine 10 years of constant physical, mental, and verbal abuse? To go to sleep every night next to the person who is your biggest nightmare?" she said. When I asked her why she stayed with him, her answer was very simple. "In our house, we don't get divorced. You got married? Deal with it. While you speak of violence, they speak to you about showing him respect. While you speak of divorce, they speak about keeping peace at home. But I don't blame them. They had no idea of the real significance of what I experienced. It even took time for me to understand."

Today, Tamar lives in a half-way house that belongs to Bat Melech and serves as a transition between living in the shelter and being independent.

"If you would see my husband," said Natalie, "you would never believe he is capable of being violent." She showed me the album from their wedding, a stylish digital album showing a sweet newlywed couple. She wore a Renaissance-style white dress, he a black suit, a large kippah on his head, mischievous eyes and a winning smile.

Following her lead, other women started to show me their personal picture albums. Slowly, I understood that I would not find some rough and tough Mafioso type in them, but entirely typical, likeable guys – the kind you meet in your everyday life.

"The saddest thing," said one of the women, "is when no one is willing to believe you that you are being abused until you role up your sleeve to reveal the bruises. Ironically, at first you will do everything in order to hide, disguise, and cover them up. You will do everything to continue playing the game with him of the perfect relationship, so that God forbid, no one will know; so that you're not a topic of conversation for the neighbors, so you don't ruin your children's marriage prospects."

'Problem in all sectors'

Before Bat Melech was founded about 15 years ago, there was no organization in Israel that dealt expressly with religious and haredi women while taking into consideration the complex social implications abuse has in the sector. Therefore, many religious women had no options for breaking the cycle of violence in which they were consumed.

"A religious woman will not contact a secular organization," said Rabbi Korman, founder and director of the non-profit organization. "She will be concerned about a conflict of interests in revealing the matter to a foreign body from the outside, about a lack of understanding of her needs as a religious woman, or from stigmas that could affect the family. She will prefer to suffer in silence. In most cases, the community itself will also encourage this type of conduct because family values are given high preference in the religious and haredi sectors.

"There isn't always real awareness about the severity of the situation. The natural inclination is towards peaceful channels and compromise. Sometimes it's possible, but in many cases, the woman is in a sick relationship, or even life-threatening situations.

"An abusive man is a character type; it is a kind of warped personality. He could be secular, and he could be religious. Men like this are spread out statistically throughout the population, and we must provide a response to these types of cases in our sector as well," he said.

Bat Melech, which was founded with rabbinical support, currently operates a shelter made up of two large houses that can shelter up to nine women and their children, a half-way house, an apartment for at-risk adolescents, and an office that provides legal assistance and employs family lawyers to represent the women, as well as psychologists and social workers to accompany the women through the rehabilitation process.

A second shelter recently closed down due to lack of budget. The Welfare Ministry only covers half the organization's costs. The rest is collected from private donors aware of the shelter's activities. However, the recession has also touched down here.

A few lone pomegranates and a jar of honey rest on the shelter's kitchen counter, a reminder of the holiday they just spent together. After years of madness, pain, fear, and anxiety, the women in the shelter celebrated their first New Year without their husbands.

Most of them don't have the support of their families. The women in the shelter and the staff act as an alternative family, and the shelter serves as the home they never had.

This year, they hope, will be a bit better for them, a year with a new beginning.

More information about the organization can be found here.

Bat Melech provides rare support for abused religious women, addressing their particular needs as they break cycle of violence and grapple with a painful reality that is particularly taboo in their communities.
Failed messiah was established and run in 2004 by Mr. Shmarya (Scott)Rosenberg. The site was acquired by Diversified Holdings, Feb 2016.