« Bedouin Car On Emergency Run Stoned By Jews During Yom Kippur | Main | Letter from Israel: A Solution To The Bastardy Problem »

Russia announces deal to sell low flying cruise missiles to Syria made by Putin in 2007 will be fulfilled. 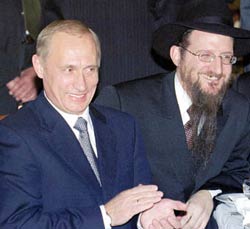 A key oligarch who supported Putin was Chabad's main financial backer, Lev Leviev. Part of the deal Leviev allegedly made with Putin was that Chabad would provide moral cover for Putin in the West if Putin threw his backing behind Chabad in the FSU.

You can read about Leviev, Putin and Chabad's 'Chief Rabbi of Russia' Berel Lazar here, here and here.

Israeli officials are threatening to sell weapons to "areas of strategic importance" to Russia after Moscow announced over the weekend that it would go through with the sale of P800 missiles to Syria, Yedioth Ahronoth reported Sunday.

Russia's announcement came after both Israel and the US implored that it abandon the sale. The cruise missiles discussed, dubbed Yakhont, have a range of 300 km, which puts Israeli ships off of Lebanon's coast at risk of being hit by missiles fired from Syria's southern port.

The original deal was signed between Russia and Syria in 2007, but last month Prime Minister Benjamin Netanyahu called Russian President Vladimir Putin and requested that he call it off, for fear the missiles will be handed to Hezbollah.

More recently Defense Minister Ehud Barak visited Moscow on a similar mission. Barak spoke with both Putin and Defense Minister Anatoly Serdyukov. During the visit, the statesmen signed agreements of confidentiality aimed at paving the way for the sale of Israeli drones to Russia.

Despite the extensive efforts, the deal was announced Friday to be proceeding as planned. "They've gone one step too far," one Jerusalem official said. "This is not in keeping with our cooperation with them."

The official said Israel had so far refrained from selling "strategic, tie-breaking weapons" to third-world countries, and that it expected Russia to do the same.

"The supply of advanced weapons to Syria, one of Hezbollah's two main supporters, especially on the eve of the fateful peace talks with the Palestinians, is not a move encouraging the moderate forces of the Middle East – but rather a prize for extremist states," the source said.

AFP quoted a senior government official as saying, "This decision reflects a poor sense of responsibility shown by a country which wants to influence and claims to act in favor of the stability of the region."

"These weapons may undermine a strategic balance in a volatile region that has now painfully sensitive peace negotiations," the official said, referring to the resumption of talks with the Palestinians.

The P800 is considered one of the world's most advanced cruising missiles due to its speed and low flight. Israel fears it will fall into the hands of Hezbollah in Lebanon, which would put its ships in the Mediterranean at risk, especially in light of terror organizations' desire to derail peace talks with the Palestinians.

"The US and Israel ask us not to supply Syria with Yakhont. But we do not see the concerns expressed by them that these arms will fall into the hands of terrorists," Russia's defense minister said after announcing the deal would proceed.

Smadar Peri and AFP contributed to this report.

Posted at 07:28 AM in Chabad, Court Jews, Israel | Permalink

Russia announces deal to sell low flying cruise missiles to Syria made by Putin in 2007 will be fulfilled.