Update 3:10 pm CDT – Professor Stephen Gillers' affidavit says specifically that he has "no personal knowledge" of the facts of the case, and he is relying on Nathan Lewin's representation. Mark I. Harrison says he was retained by Nathan Lewin and paid $500 per hour for his "study and testimony" in this matter. Neither expert is impartial and their opinions should be taken with a very large grain of salt. I'll try to get all the documents posted as soon as possible. [End Update.]

Update 4:00 pm CDT – I should also mention that Mark I. Harrison's opinion was filed with the court today and is dated 9-7-10. But his opinion was published by Yated Ne'eman, the haredi 'newspaper' that has been supporting Rubashkin, last week. In other words, this 'expert' allowed his paid opinion to be leaked to the press and used publicly before the court had its filing. This is unethical, to say the least, and is indicative of Nathan Lewin's disregard for the truth and for ethics. [End 4:00 pm update.] 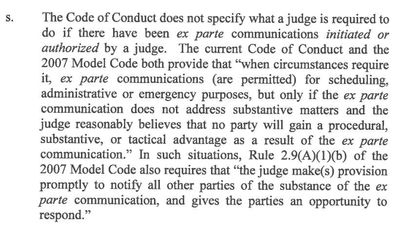 Realize that defense attorneys were notified by the court before the raid and were asked to make themselves available for the potential detainees. This was done without identifying the target of the raid. This means these attorneys knew the court was involved in logistical planning for the raid's aftermath even before they knew who their clients were.

Also realize that Sholom Rubashkin was not a target of that raid and was not in fact arrested until 5 months later – after the judge's participation in logistical planning for the raid's aftermath was widely known.

Because Rubashkin was not a target of that raid there was no legal reason his attorneys need to be contacted regarding the judge's participation in logistical planning for the raid's aftermath.

Past that, Martin De La Rosa-Lorea's motion to have Judge Reade recuse herself was filed before Sholom Rubashkin was arrested and was rejected by the court before Sholom Rubashkin was arrested, and Rubashkin's attorney's knew that and relied on this not to call for the judge's recusal. This means they had adequate notice of the judge's participation in logistical planning for the raid's aftermath and agreed to its legality.

In other words, Harrison's motion is largely (if not completely) smoke and mirrors. [End 4:20 pm update.]

As you read this, keep in mind that both experts are paid consultants for Rubashkin.

What both experts do is take Nathan Lewin's explanation of the FOIA documents at face value. But the documents themselves do not in any way prove the Rubashkin team's allegations – which included misquoting those FOIA documents. Indeed, some of those misquotes appear in the following press release, as well:

Cedar Rapids, IA - In a major turning point in the effort to vacate the conviction of Sholom Rubashkin, two of the country’s leading experts on judicial and legal ethics filed sworn opinions that said both U.S. District Court Chief Judge Linda Reade, who presided at Rubashkin’s trial, and the federal prosecutors who brought and tried the case against him had committed judicial and legal misconduct. Under binding Supreme Court law, the failure of the judge and the prosecutors to disclose to Rubashkin’s trial lawyers that they had met privately numerous times to plan the May 2008 raid on the Agriprocessors kosher meatpacking plant in Postville, Iowa requires reversal of his trial and sentence.

The opinion of the experts was filed in Rubashkin’s reply brief Wednesday supporting the motion his lawyers had filed for a new trial based on the newly discovered evidence of collaboration between law enforcement, prosecutors and Judge Reade.

Mark I. Harrison, who chaired the American Bar Association’s committee that revised the ABA Code of Judicial Conduct (adopted unanimously at an ABA national assembly in 2007), found that Judge Reade violated the Code by “initiating and/or authorizing and participating in numerous ex parte meetings with prosecutors and other law enforcement personnel in connection with an impending matter,” as well as by “failing to disclose the nature, substance and extent of the ex parte communications to all parties at the earliest practicable time” and “failing to recuse herself from presiding over the trial of the principal individual responsible for managing the business that was the subject of the ex parte proceedings.”

Professor Stephen Gillers, one of the most frequently quoted authority on legal ethics, who teaches at New York University Law School, found in his sworn expert opinion that the prosecutors “violated rules governing ex parte contact with the judge who presided at the trial of Mr. Rubashkin and in failing to inform Mr. Rubashkin’s defense counsel at the inception of the criminal proceeding against Mr. Rubashkin.” Gillers found that prosecutors should have communicated with court administrative personnel, not with the chief judge personally, and should have kept a detailed record of all communications with the chief judge. Failure to inform defense lawyers of the meetings with the judge violated prosecutors’ constitutional obligation to criminal defendants.

Rubashkin’s attorneys contend that beginning more than six months before the raid, Judge Reade of the U.S. District Court for the Northern District of Iowa had off-the-record meetings with prosecutors during which she received briefings on the raid preparations. She also cleared the date of the raid with her vacation schedule, participated in meetings at which “charging strategies” were discussed, expressed to prosecutors and immigration officials her “support” for the raid, and directed that she be briefed privately by prosecutors on how the raid was to be carried out.  Rubashkin’s defense counsel swore in affidavits that they would have filed a motion to recuse Judge Reade if they had been made aware of the full extent of her participation.

Proof of Judge Reade’s participation in the planning of the raid continues to emerge from recently produced government documents. One e-mail contained in the Rubashkin lawyers’ recent filing indicates that prosecutors viewed her as a “stakeholder” in the raid, and a second e-mail refers to her presence at “weekly” meetings held for several weeks before the raid.

“It now seems clear from the most authoritative juridical experts that Sholom Rubashkin’s trial was conducted in violation of American legal and constitutional principles,” said Rabbi Pesach Lerner, executive vice president of the National Council of Young Israel. “Mr. Rubashkin is entitled to due process of law, like all American citizens, and we call on the Justice Department and the courts to treat him fairly and equitably.”

Rubashkin’s lawyers have asked that Judge Reade transfer their new-trial motion to another judge from a “distant district” for determination, “in order to preserve public confidence in the impartiality of the judicial system.” They are also seeking fully unredacted documents that relate to the coordination of the Agriprocessors raid, as well as discovery and an evidentiary hearing on the motion for a new trial.

Updated: On Erev Rosh Hashana, Nathan Lewin and Rubahkin's legal and PR teams continue to distort the truth.
Failed messiah was established and run in 2004 by Mr. Shmarya (Scott)Rosenberg. The site was acquired by Diversified Holdings, Feb 2016.