« Rabbi Nachman's Grave: Pot Parties, As Much Alcohol As You Can Drink And Ukrainian Girls Wearing Next To Nothing | Main | Shul Removes Plaques Honoring Rabbi Accused Of Child Sexual Abuse »

House of rebbe's son in flames as questions arise over fire's origin and recent factional fighting and its related vandalism.

It's unclear whether the fire is linked to recent factional fighting in the hasidic village, although some partisans believe the fire is part of the conflict and was intentionally set. But at this point all that is known is that the fire started in the home's sukkah. 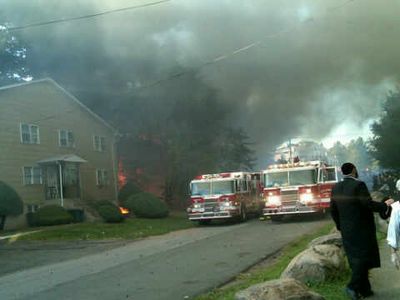 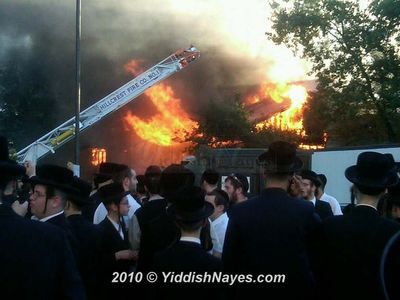 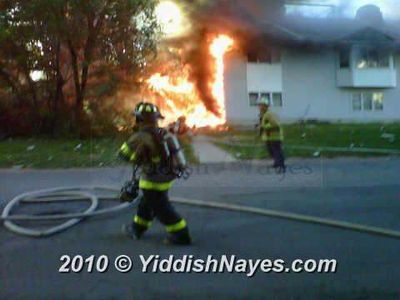 Update 8 pm CDT – The Journal News has a report:

A billowing cloud of dark gray smoke covered the neighborhood as bright red flames shot from the two-story house at 12 Truman Ave., near Eisenhower Avenue. The smoke was visible from the Palisades Interstate Parkway.

The fire ate away at the house, destroying the structure while the intense heat melted the siding. Some walls were gutted and holes were seen in the roof.

The Hasidic Jewish village's streets were crowded with hundreds of people, as the Ramapo police and New Square emergency services kept them back.

Young children climbed onto construction rafters to get a better view as firefighters poured water on the two-story house.

With the house seemingly destroyed, John Kryger, a deputy fire coordinator for Rockland Fire and Emergency Services, said the firefighters "main job is to keeping the fire from spreading to nearby homes."

New Square has high-density houses with many homes close to one another.

The Hillcrest Fire Department volunteers took the lead in battling the fire.

Along with the Hillcrest firefighters, the Spring Valley and New City fire departments sent pumper trucks to the scene. The Monsey Fire Department sent firefighters and its FAST team to enter the house as a precaution.

Assembled on Route 45 in case they were needed were volunteers with departments from Nanuet, Thiells, Suffern and Hillburn, Kryger said.

Hatzolah and Spring Hill ambulance corps were on the scene. Kryger said no firefighters were reported hurt and he was unsure if anyone was in the house when the fire erupted.

The fire is believed to have started near the side of the house by a sukkah, a hut-like structure.

The fire during the celebration and prayers for the Jewish new year of Rosh Hashanah came two days after five cars were vandalized while people prayed at a nearby senior center in what has been described as ongoing friction between a group of residents and the community's leadership.

Journal News pictures of the fire.

NEW SQUARE — A fire that tore through a Truman Avenue home appeared to have started near a central air conditioning unit, close to where straw was being stored to build a hut for the upcoming Sukkot holiday, Ramapo police said this morning.

Investigators do not think that the blaze had anything to do with vandalism that was reported in the village over the weekend, according to Ramapo police Lt. Brad Weidel.

"There is no indication that it had anything to do with the previous crime," he said.

The fire appeared to have started under the rear deck of the three-story building. A central air conditioning unit was located close to what appears to be the point of origin, investigators said.

Straw and other dry material used to build a Sukkah, or hut, for the celebration of Sukkot was placed near the air conditioning unit, Weidel said. Sukkot begins next Wednesday evening.

Fire investigators are checking to see if a spark from the unit ignited the pile of straw, leading to the blaze.

No one was injured in the fire, which was reported shortly after 6 p.m. and took more than an hour to bring under control.

Residents of the home got out safely and no firefighters were injured.

Volunteers from the Hillcrest, Spring Valley, New City and Monsey fire departments as well as the Spring Hill and Hatzolah ambulance corps and Rockland Paramedic Services were called to the scene.

House of rebbe's son in flames as questions arise over fire's origin and recent factional fighting and its related vandalism.
Failed messiah was established and run in 2004 by Mr. Shmarya (Scott)Rosenberg. The site was acquired by Diversified Holdings, Feb 2016.