« Letter from Israel: A Solution To The Bastardy Problem | Main | How Should Rabbis Respond To Reports Of Child Sexual Abuse? »

Catholic Church ally Vito Lopez worked with the Church and Satmar to block passage of a bill that would have markedly reduced child sexual abuse in New York State. Lopez has also now been linked to what may be charity fraud.

The Post deserves a journalism prize for these reports: 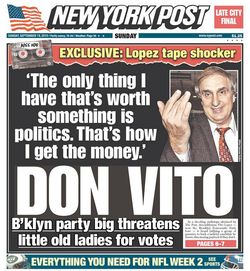 Assemblyman Vito Lopez bullied and cajoled eight little old ladies during an arm-twisting session aimed at getting them to back his candidate in a Brooklyn judicial race, a shocking audiotape obtained by The Post reveals.

The May 2005 conversation, captured on a hidden recorder, not only exposes the 69-year-old Lopez's heavy-handed tactics in dealing with his core elderly supporters but also offers a rare glimpse into the backrooms of bare-knuckle Brooklyn politics where Lopez reigns.

Lopez called the hourlong meeting at his district office to get the women to support civil court judicial hopeful Richard Velasquez -- once a lawyer for the senior-center nonprofit empire Lopez founded -- in his race against lawyer Marty Needelman. The election was seen as a leadership test for Lopez, who was on the verge of becoming the Democratic Party boss for all of Brooklyn.

He explosively references this power play -- and the competition between Hispanics and Hasidim in the area over housing -- at one point blurting, "If no one respects my leadership, how do I fight the Hasidim?"

The Spanish-speaking women all came from South Williamsburg, where Needelman was popular with Hispanics. Lopez explains he needs Velasquez to win because "I made a pledge to people that the next [judge] would be Hispanic, right? To balance it."

The women aren't swayed, telling Lopez that they like Needelman and that voters don't care about race or, for that matter, the fact that Lopez is "Italiano."

"I want to take people on the trip who really don't like me?" he says. "I mean, that's stupid, right? That's what I'm trying to say."

Lopez then hints to one of the women, who had worked as a $225-a-day poll worker, that only Velasquez supporters will get the coveted gigs on Election Day. Poll workers are legally prohibited from trying to influence voters.

"If I put people in the polls to be poll watchers and the candidate that [Lopez's political] club backs is not backed by those people, how can I do that?" he says.

At one point, Lopez suggests that if the votes for Velasquez fall short at PS 19, the polling site nearest the women, he will punish the entire neighborhood.

"Say Richard Velasquez wins, and most people think he will. He wins. But the only place we lose is over here, 19. If you're me, who do you help out? Do you help out the area around here, or do you help the people in Lindsay Park? It changes everything to me," he says.

Velasquez, who had been rated "not approved" by the city Bar Association, was elected to the bench a month later.

But Lopez's efforts to recruit the women did not pay off.

Needelman -- who told The Post that Lopez once considered him "part of the family" but became "obsessed with total control" -- won easily at the PS 19 polls.

Lopez's link to a charity and how that link may constitute fraud:

Assemblyman Vito Lopez claims he has nothing to do with the Ridgewood Bushwick Senior Citizens Council, a sprawling social-service cash cow that has received at least $304 million in taxpayer funds over five years and is under investigation for fraud.

But Lopez's ties to the organization he founded as a young social worker in the 1970s still run deep:

* His girlfriend, Angela Battaglia, is the organization's No. 2 official, making $329,910 a year. His campaign treasurer, Christiana Fisher, is its executive director and has a $659,591 salary for working only 17½ hours per week.

* Lopez was personally paid $57,600 as a consultant in a single year by Ridgewood Bushwick.

* Lopez's Bushwick Democratic Club operates out of a grimy building on Wyckoff Avenue owned by one of Ridgewood Bushwick's three dozen subsidiaries, which claims on tax forms to operate the building to provide "respite services" for senior citizens.

* The thousands of constituents of Ridgewood Bushwick and its 2,000 employees form the core of Lopez's political machine in north Brooklyn.

* He hosts Ridgewood Bushwick's signature taxpayer-funded events, including its massive seniors picnic in Long Island and its Thanksgiving and Christmas dinners.

* He allegedly told a political ally who was starting a nonprofit to follow Ridgewood Bushwick's model when selecting a board: "You want a bunch of 80-year-old people and get them together." The Post has revealed that the elderly members of Ridgewood Bushwick's board exercised little oversight of the group.

* Ridgewood Bushwick has built and manages hundreds of units of affordable housing, which Lopez helped fund with city and state subsidies using his influence as chair of the Assembly's Housing Committee.

Catholic Church ally Vito Lopez worked with the Church and Satmar to block passage of a bill that would have markedly reduced child sexual abuse in New York State. Lopez has also now been linked to what may be charity fraud.