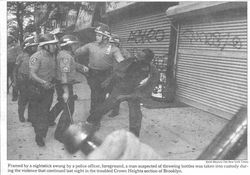 Nelson, 35, was in stable condition at Harlem Hospital.

The family of Yankel Rosenbaum, the Orthodox Jew he killed in the 1991 riots, called it an Old Testament kind of justice.

"Thou who drowns someone else, will drown," said Isaac Abraham, a spokesman for the Rosenbaum family. "It is now that the stabber gets stabbed. To Nelson, a crime with a knife involved is like bagel and lox."

Police think Nelson was driving into Manhattan on the George Washington Bridge when a road-rage dispute turned physical.

He was found unconscious slumped on a sidewalk outside his Chevrolet car near the end of a bridge ramp just after 2 a.m. An ice pick was found nearby.

Nelson's family held vigil at the hospital last night. "We won't know the truth until he wakes up," his sister-in-law said.

Police said they had no witnesses and were unable to speak to Nelson because he was intubated and sedated.

On Aug. 19, 1991, Nelson, then 16, was part of a group of young black males who rampaged through Brooklyn's Crown Heights neighborhood after Yosef Lifsh, a 22-year-old Hasidic Jew, ran down and killed Gavin Cato, a 7-year-old Guyanese boy.

The youths surrounded Rosenbaum, 29, a doctoral student from Australia who had nothing to do with the car accident.

Rosenbaum was stabbed several times. Before he died, he named Nelson as his killer.

Nelson, who years later confessed he stabbed Rosenbaum, was acquitted at his first murder trial and a second trial ended in a hung jury. He was convicted in federal court of violating Rosenbaum's civil rights and served 10 years, leaving prison in 2004.

In May, Nelson was quoted as saying that he was sober, had a toddler daughter and was living a quiet life in Hillside, N.J.

Norman Rosenbaum, 53, a lawyer in Melbourne, Australia, couldn't find too much sympathy for the man who killed his brother.

"He never expressed any real remorse," Rosenbaum said. "Now he might just understand the type of suffering he managed to inflict on people."