But do protesters have a valid point? Or are they conflating their belief in vegetarianism with animal rights? 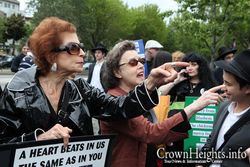 The Alliance to End Chickens as Kaporos held a protest in Crown Heights Sunday.

Their signs and their arguments opposed the slaughter of chickens, not the very real animal handling, sanitation, health and waste issues that plague these ceremonies.

One gets the feeling these demonstrators could just as well have been protesting an organic free range chicken slaughter done in a modern facility designed and audited by leading animal handling expert Dr. Temple Grandin.

The problem with kapparot (besides the probably pagan origin of the ceremony) is not that chickens are slaughtered.

The problem with kapparot is that chickens are cruelly handled. They are transported crushed in cramped cages that do not allow them to move or open their wings. They often are not given food or water, and can go hungry and thirsty for days. They are left in those cramped cages, sometimes in the open sun, until slaughter. After slaughter the chickens are often poorly stored at temperatures that are too high to be safe, as their blood, feathers and waste litter the streets. And then, while some birds are cleaned and processed, many others are simply discarded – as happened in Crown Heights in previous years – because the cost of cleaning and processing the birds is too high to make it worthwhile.

But to argue that the slaughter itself is problematic – not because the chickens are being tortured to death, but simply because they are being killed – defeats the entire purpose of the protest.

Meat eaters will find nothing wrong in the humane slaughter of animals for food. To argue a meat eater should do kapparot with money to save the life of a chicken is nonsensical when the money he would use for kapparot is donated to a fund to help feed the poor chicken on the upcoming holidays. The chicken will be slaughtered one way or the other.

What these protesters are really arguing for is vegetarianism, not humane slaughter and humane animal handling.

Under Jewish law, it is certainly permitted to be a vegetarian. In fact, it could be argued that being a vegetarian is a higher form of eating that elevates a person.

But it certainly cannot be argued that Jewish law in any way forbids meat eating or considers properly done ritual slaughter to be cruel and violation of the tzaar ba'alei hayyim prohibition. Yet this is exactly what these protesters try to argue, and it is why they fail.

But misguided protests will not do anything to change how kapprot are done in haredi communities. It's time The Alliance to End Chickens as Kaporos and other animal rights activists* learned that.

* It should be noted that PETA – unlike other animal rights groups – has focused on animal handling and public health issues along with unnecessary waste of slaughtered birds, and not on the slaughter itself.

Update 12:45 pm CDT – Here is video of previous kapparot events in Crown Heights. I posted this previously but it seems worthwhile to post it again now. [Hat Tip to WSC for the reminder]:

Posted at 10:15 AM in Chabad, Haredim, Kosher Scandal | Permalink

But do protesters have a valid point? Or are they conflating their belief in vegetarianism with animal rights?
Failed messiah was established and run in 2004 by Mr. Shmarya (Scott)Rosenberg. The site was acquired by Diversified Holdings, Feb 2016.