« Government Is Alienating Diaspora Jews, Livni Says | Main | Blog Schedule And A Note On The Meaning Of Sukkot »

Cops found Nechama Rothberger inside the smashed-up Toyota, typing a text on her phone, according to court papers. Investigators also found evidence she was texting at the time of the 11:15 p.m. crash.

Note that even one day after the accident, girl's attorney and family can't even issue a brief, coherent statement showing empathy for the victim's family and hoping for his recovery:

Clinging to hope, the family of a Brooklyn deliveryman run over by a texting teen driver refused to remove him from life support Tuesday as it vowed to sue.

"I want justice for my husband," the wife of Tian Sheng Lin, 53, said at Kings County Hospital after a sleepless night at his bedside. 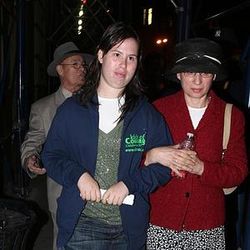 The father of three was making a delivery late Sunday for his Chinese restaurant in Midwood when Nechama Rothberger, 19, plowed a Toyota Camry into his scooter.

Cops found Rothberger inside the smashed-up Toyota, typing a text on her phone, according to court papers. Investigators also found evidence she was texting at the time of the 11:15 p.m. crash.

Lin, who brought his family to America from China's Fujian Province in 1992, was left brain-dead. He also suffered organ damage and shoulder injuries.

"He has such massive injuries," his wife, Xiu Ying Zhang, 52, said through an interpreter. She said she was "upset" Rothberger was allegedly too busy texting to pay attention to the road.

"It would take a miracle, but the family is still hoping for recovery," he said.

Rothberger, the daughter of a Midwood doctor, was charged with driving while using a cell phone and reckless driving and was released on $5,000 bail.

Her lawyer did not return a call yesterday, and a receptionist at her father's office said he would not comment.

Lin's family said all it can do is pray for him and work even harder to keep open the family restaurant.

Another daughter, Meina Lin, 27, looked at photos yesterday that showed the family arriving in America and running the restaurant in its early years.

"He was young then," she said of her father, pointing at a picture. "We looked happy here."

Cops found Nechama Rothberger inside the smashed-up Toyota, typing a text on her phone, according to court papers. Investigators also found evidence she was texting at the time of the 11:15 p.m. crash.
Failed messiah was established and run in 2004 by Mr. Shmarya (Scott)Rosenberg. The site was acquired by Diversified Holdings, Feb 2016.