Exclusive: Is Chabad's Chief Rabbi Of Russia Part Of A $2 Billion Swindle?

In early 1993, Angola was deep in a decades-long civil war between the Russian-backed government and U.S.-South Africa-Brazil-and Portugal-backed-rebels. Arcadi Gaydamak the Russian-Israeli-French-Canadian businessman, was asked by the government to sell Angola's oil, a difficult task due to the disruption the war caused.

Eventually, the rebels lost much of their western support, in part due to their role in human rights violations. 500,000 people are thought to have been killed in the civil war, with many more wounded and maimed.

UNITA, the leading rebel faction, supported its war by illegally selling diamonds. Many were moved by a middleman through the diamond cartel De Beers.

The UN imposed sanctions that were meant to stop UNITA's diamond trafficking. Even so, of the $4 billion dollars in diamonds illegally trafficked during that time, UNITA is estimated to have sold $3.72 billion, 93% of the total.

At the end of the 1990s, as the war was coming to an end, the Government of Angola needed to find a way to control diamond sales, both to keep the revenue in government coffers and to prevent UNITA and other rebel factions from using diamond trafficking to pay for rearming. 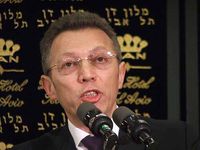 In an interview conducted earlier this week, Gaydamak told FailedMessiah.com he brokered a deal that brought Russian-Israeli oligarch Lev Leviev to Angola.

The Angolan government "needed financing and some kind of professional people. I approached Mr. Leviev and I invited Mr. Leviev to work in Angola."

The government had set up a company and given it the exclusive export rights to Angola's diamonds. Leviev would provide that company with the help it needed.

The deal made Leviev – already a very wealthy man – much wealthier.

Here's how the theft allegedly worked.

As the UNITA rebels were illegally trafficking in billions of dollars in diamonds, they used the proceeds to buy weapons and fund their war, circumventing both UN sanctions and the Lusaka Protocol, an international agreement meant to stop arms sales to all parties in the Angolan civil war. Gaydamak, already involved in Angola's oil business, used his connections to procure arms for the Angolan government. That meant Gaydamak was technically in violation of the Lusaka Protocol, and that made his public involvement in Angola's post-civil-war diamond trade problematic.

So Gaydamak says he and Leviev hammered out a deal. They would split the diamond proceeds 50-50. Half would be Leviev's and half Gaydamak's. But Gaydamak's name would not publicly be associated with Leviev's diamond sales.

The deal was written out as a contract, signed by both parties and then placed in a sealed envelope. Gaydamak says that, "in accordance with the Jewish tradition" the envelope containing the signed contract was given for safekeeping to a rabbi both men respected and trusted – Berel Lazar, Chabad's chief rabbi of Russia.

Leviev was supposed to transfer Gaydamak's share on a regular basis, but Gaydamak says Leviev never paid him anything.

As his losses mounted Gaydamak was forced to bide his time, he says because of his political and legal situation surrounding his arms dealing.

By 2006, Gaydamak could wait no longer. Despite his situation he had his attorneys send letters to Leviev demanding payment. Leviev, Gaydamak says, never responded.

Gaydamak also turned to the chief rabbi for a copy of the signed contract. Berel Lazar, Gaydamak says, told him he destroyed it. According to Gaydamak, Lazar also did not answer repeated letters from Gaydamak's attorneys asking for the contract. Recently, Lazar was asked about the contract by an Israeli television news reporter. Gaydamak says Lazar answered that he "lost" the envelope containing the signed contract and did not mention that loss to Gaydamak because Leviev told him the document inside it was "not important."

When asked by Failedmessiah.com for comment on this story, Lazar called questions about the matter "intrusive." He objected to being called at his home and said he would answer questions if called at his office. When asked for the best number to reach him at there, Lazar hung up. A call this morning shortly after 9:00 am Moscow time to the listed number of Chabad's chief rabbinate was not answered.

In February 2007 Gaydamak entered Israeli politics. He formed a political party and entered the race for mayor of Jerusalem. During the time he campaigned he told me he paused his fight with Leviev and Lazar because he felt it would negatively impact his campaign.

In November 2008 Gaydamak lost the election. In early 2009 he resumed his attempt to recover the money he says Leviev stole from him.

Much of what I've just reported is already public knowledge in Israel.

But what has not been made public until now is what Gaydamak told me exclusively.

In 2009 Gaydamak went to a Moscow beit din, Jewish religious court, and filed suit against Lazar in an attempt to find out what really happened to the contract. Gaydamak says Lazar repeatedly failed to answer summonses issued by that beit din.

After the repeated attempts to get Lazar to answer failed, the matter was sent to zabla, another form of a beit din. Rather than a fixed court, this beit din would be made up of one rabbi to be picked by Gaydamak, one rabbi picked by Lazar, and a third rabbi jointly picked by those two rabbis. According to Gaydamak, Lazar failed to respond to this as well.

Gaydamak says he waited before publicizing this until it was absolutely clear Lazar was not complying and rabbis gave Gaydamak permission to publicize it.

Failing to answer a summons from a beit din or zabla can result in excommunication.

Over the years, both Gaydamak and Leviev made significant donations to Jewish charities.

For example, in 2006 Gaydamak set up a tent city that housed and fed thousands of Israeli refugees from Hamas shelling. He supports several other Israeli charities and has donated extensively in Russia, as well – including donations to Chabad.

Until the recent economic downturn, Leviev was Chabad's largest backer, singlehandedly funding hundreds of schools and Chabad Houses throughout Russia.

In December 2005, Ha'aretz published a long article by its chief intelligence correspondent describing how Chabad took control of the Russian Jewish community. The article refers to Gaydamak as Leviev's partner and shows both men were major Chabad donors in the late 1990s:

…[Oligarch Roman] Abramovich, who had business ties with Leviev, recruited the Israeli diamond merchant for a struggle on behalf of [Vladimir] Putin and against [Vladimir] Gusinsky [Russia's first post-Soviet independent media mogul and a critic of Putin. Gusinsky was also the head of REK, the Russian Jewish Congress.] In return, Leviev received the support of 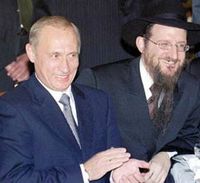 Putin, who in 2000 was elected president of Russia. That support made it possible for Lazar to receive Russian citizenship in record time and to be recognized in practice as the chief rabbi of Russian Jewry. [Rabbi Adolph] Shayevich [the long-serving chief rabbi affiliated with the Russian Jewish Congress,] was shunted to the sidelines.

The [newly-formed] Jewish "federation" [FEOR] of Lazar and Leviev became the darling of the government. This was clearly manifested when President Putin took part in a resplendent ceremony to dedicate the FEOR center in the Marina Roscha neighborhood in 2001.

A plaque at the entrance to the building lists the donors. They include Leviev, his partner Gaydamak, [Chabad oligarch Vladimir] Slutsker and other oligarchs.…

Lazar and FEOR left REK. In 2002 Gusinsky was forced [by Putin] to leave Russia and then to sell his assets there. The success of Lazar and Leviev can be attributed to the fact that Putin used them in his struggle against Gusinsky and received a Jewish "umbrella" from them in return.…

Lazar went on to present Putin with a medal at the 60th anniversary of the liberation of Auschwitz. The medal turned out to have been issued by the Russian government itself and Lazar's presentation was made standing in the snow in Auschwitz moments after the official ceremony ended as dignitaries walked away.

Lazar also issued repeated statements in support of Putin, and statements that downplayed Russian antisemitism, even during times Putin's government pursued policies – and arms sales – seen by many as a danger to Israel. As he did, Leviev provided increasing funding for Lazar and the Federation of Russian Jewish Communities.

It now appears that funding may have come from money Leviev allegedly stole from Arcadi Gaydamak, with the help – accidental or not – of both mens' rabbi, Chabad's chief rabbi of Russia, Berel Lazar.

[Correction 11:21am CDT – The article inadvertently reported that both Lazar and Leviev had been taken to beit din by Gaydamak. That was an error. Only Berel Lazar was summoned to beit din. The article now reflects that correction.]

Exclusive: Is Chabad's Chief Rabbi Of Russia Part Of A $2 Billion Swindle?