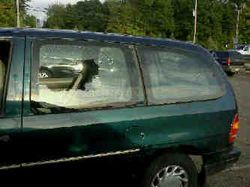 NEW SQUARE — The windows of five cars were smashed Sunday night by vandals resulting from what Ramapo police suspect is continuing strife between factions inside the Hasidic Jewish village.

The car windows were likely smashed with a hard object such as a bat or hammer, Ramapo police said. No rocks or other objects were found within the glass inside the cars.

The car owners were attending religious services at one of the local synagogues for the Rosh Hashanah new year when the vandalism occurred. They were not praying at the main shul in the village used by the grand rabbi and others.

Ramapo police were investigating in the incidents, but suspect the vandalism resulted from lingering disputes between a group of residents and the establishment in New Square. Several months ago there were problems with young people staying at a local school that led to arrests on minor charges.

Police were not sure of the details of the dispute, but don't believe people from outside the village were involved.

"We're looking for witnesses," Ramapo police Lt. Mark Emma said. "This sounds like this resulted from strife within the community."

[Update] New Square leaders, including the Squarer Rebbe, object to Shabbat prayer services held in nearby nursing home, allegedly react by vandalizing cars of participants.
Failed messiah was established and run in 2004 by Mr. Shmarya (Scott)Rosenberg. The site was acquired by Diversified Holdings, Feb 2016.