A bank is seeking to grab the property and assets of Congregation Chabad-Lubavitch West of Boynton Beach to pay off a delinquent loan. Among those assets are the congregation's five Torahs. Threatening to seize the Torahs is "a desecration," said Howard Dubosar, a Chabad attorney. "This is a bank playing hardball."

When Jews at Congregation Chabad-Lubavitch west of Boynton Beach gather Friday for the start of Yom Kippur, the holiest of Jewish holidays, they will be under a cloud of uncertainty.

A bank is seeking to grab the Chabad's property and assets to pay off a delinquent loan.

Among those assets are the congregation's five Torahs.

Threatening to seize the Torahs is "a desecration," said Howard Dubosar, a Chabad attorney. "This is a bank playing hardball."

David Seleski, president of Stonegate Bank, said the bank isn't trying to attack the Chabad through its religion. "We just want to get paid," Seleski said.

But Chabad lawyers are equally upset about the timing of a legal action by the Fort Lauderdale-based bank. Stonegate is seeking to proceed with a foreclosure of the Chabad property, despite the synagogue's Chapter 11 bankruptcy filing in June. Normally, Chapter 11 puts a halt to all litigation.

But earlier this month Stonegate filed a motion with the U.S. Bankruptcy Court to allow its foreclosure lawsuit to go ahead anyway, arguing that the Chabad's bankruptcy filing was done in bad faith and was simply a bid "to stall for more time."

The motion was filed on Sept. 10, which was Rosh Hashana, the Jewish New Year.

Phil Landau, the Chabad's bankruptcy lawyer, said it was "disrespectful" for the filing to be made on this day. "It could have been filed a few days before or a few days after," Landau said.

Dubosar went even further, saying that the filing was "calculated to harm the psyche of this religious institution. This is the holiest time of the year. It's like foreclosing on a church on Christmas Eve."

Stonegate's Seleski said the Rosh Hashana filing date was not deliberate. But he was not bothered by charges that the filing was inappropriate.

"Oh, too bad," Seleski said. "I don't think it's appropriate that they're not paying their loan back. I'm not aware of any holiday. My job is to collect as much money as I can for our shareholders.

"We're not trying to be bad guys," Seleski said. "But we want to get repaid. If they repay us, it all goes away."

Bankruptcy experts not connected to the case, however, also were critical. "They didn't have to wait until Rosh Hashana and Yom Kippur to do this," said Tina Talarchyk, a West Palm Beach bankruptcy lawyer. "They could have easily done this in July or August. For these extremely observant folks, it's a slap in the face."

The bank's attorney, Robert Furr, did not return a phone call.

The bad blood between the Orthodox Jewish congregation and the bank has its roots in a 2007 loan. That loan, for $3.8 million, was made by Stonegate for a planned expansion of Chabad's campus at 10655 El Clair Ranch Road. The expansion never took place, however, and in a September 2009 lawsuit, the Chabad accused the bank of engaging in a "bait-and-switch." The Chabad alleged the bank didn't make good on promises to provide additional financing in the form of a bond that would have paid off the loan and allowed the expansion to proceed.

Stonegate fired back in October with a foreclosure lawsuit. Documents recorded with the loan allow the bank to seize the Chabad's assets and all member pledges, according to Palm Beach County records.

In July, Stonegate filed a motion to contact congregants who have pledged money to the Chabad, with the intent to "verify" that the pledges will actually be made. The move was rejected by a bankruptcy judge, Landau said.

Now Stonegate's Sept. 10 motion to reinstate the foreclosure case could have a chilling effect on pledges by Chabad Lubavitch's members on Yom Kippur, Landau said. "They will be nervous because their pledges are at risk" of being diverted from the Chabad, Landau said. 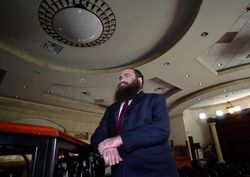 Chabad congregants worshipping during these High Holy Days may wonder if this is the last time they will see their Torahs, Landau said.

"We will be sensitive to the issues surrounding any religious artifact," Seleski assured. "We're not going to go in there and burn them."

But Rabbi Moshe Scheiner of the Palm Beach Congregation on Palm Beach said the Torah should not even be part of the discussion.

"The Torah is the most sacred object in Judaism," Scheiner said. "I don't think it should be treated like a commodity. It is the soul of a congregation, and you can't repossess a soul."

Scheiner said many institutions, including synagogues, are having a tough time. He said Stonegate should realize this and try harder to work something out.

"I would hope there could be a kinder and gentler approach this time of year," Scheiner said.

The Chabad soon will find out whether the bank is willing to let the congregation keep its property.

A hearing on the bank's motion is set for Sept. 24.

That is the Jewish holiday of Sukkot, a festival commemorating the harvest.

A bank is seeking to grab the property and assets of Congregation Chabad-Lubavitch West of Boynton Beach to pay off a delinquent loan. Among those assets are the congregation's five Torahs. Threatening to seize the Torahs is "a desecration," said Howard Dubosar, a Chabad attorney. "This is a bank playing hardball."
Failed messiah was established and run in 2004 by Mr. Shmarya (Scott)Rosenberg. The site was acquired by Diversified Holdings, Feb 2016.