« Twitter User Sells @Israel Username To Israeli Government For 6 Figures – Or Did It? | Main | Rabbi Nachman's Grave: Pot Parties, As Much Alcohol As You Can Drink And Ukrainian Girls Wearing Next To Nothing »

At A Maximum Security Prison, Jews Heed The Shofar's Call

On a breezy summer afternoon at the maximum-security prison that dominates the landscape here, inmates gather around a stocky bearded man as he prepares to blow a shofar. Philip Drelich sounds one long blast, and then the crowd disperses, off to their daily routine. 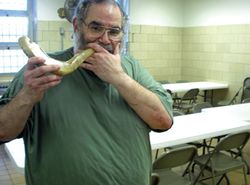 Stormville, NY – On a breezy summer afternoon at the maximum-security prison that dominates the landscape here, inmates gather around a stocky bearded man as he prepares to blow a shofar.

Philip Drelich sounds one long blast, and then the crowd disperses, off to their daily routine.

Just like on the outside, the Jews at this prison, the Green Haven Correctional Facility in upstate New York, are mindful of the daily shofar-blowing ritual during the Jewish month of Elul, a signal of the upcoming High Holy Days. It’s one of many Jewish observances performed by inmates who have ended up here for crimes ranging from drug possession to rape and murder.

Despite the circumstances — long prison sentences, convictions for heinous crimes — Jewish practice is not cast aside at the door of American prisons. Some inmates even use their time to embrace a religion they had neglected.

“I certainly became more aware of religion here in jail,” says Lewis Scharff, a convicted murderer at Green Haven who spoke at the prison synagogue, just opposite the Catholic chapel. “We have two people who found teshuvah [repentance] during their time here.”

Walking down the long, bleak corridors of Green Haven, which are kept immaculately clean by an army of inmates constantly mopping the floors, a number of convicts wearing yarmulkes and tzitzit are visible. Every morning and on Shabbat, about 12 regulars show up for prayer services at the prison synagogue; more than double that number are expected for the High Holy Days. On Passover, inmates lead the seders.

On Sukkot, says Drelich, who is serving a life sentence for murder, the prison will have two sukkahs: “One for those in solitary confinement, and the other in the general quarters.”

Maximum-security prisons in the United States have relatively few Jewish inmates, according to the Aleph Institute, a Chabad-affiliated organization that reaches out to Jews behind bars. Most Jews in the prison system usually end up at lower-security facilities for crimes such as fraud or tax evasion.

But Green Haven has enough Jewish inmates that it is the only prison in New York with a hot kosher kitchen, where food is prepared on site. Of the 1,984 inmates there, 150 are listed as Jewish. About 70 are on the kosher meal plan.

Rabbi Zvi Boyarsky, who visits Green Haven frequently, says he doesn’t think of the crimes committed by the inmates to whom he offers help.

“We’re not helping them get out of prison, we’re helping them spiritually — to bring them to a state of mind which had they had exposure to, maybe they wouldn’t have done what they did,” he says.

It is not known how many of America’s 2.3 million inmates are Jewish. The Aleph Institute says it helps 4,000 inmates and their families, and that at least another 1,000 Jews are in prisons.

At Green Haven, the hub of Jewish life is the kosher kitchen, which dishes out three meals a day. The kosher supervisor, Rony Berkoviz, an Israeli-born inmate jailed for a sex offense, proudly displays the separate dairy, meat and parve sets of dishes and cutlery.

Berkoviz laughs when asked if the kosher food is better than the standard fare. “About 90 percent of the time it is exactly the same food,” he says. “It might just be a little more cooked, that’s all.”

Drelich, who has been at Green Haven for 29 years and is the most veteran Jewish inmate there, says observing Judaism in the prison is no different than anywhere else, with one notable exception. He points to the notice board near the entrance to the prison’s synagogue.

At A Maximum Security Prison, Jews Heed The Shofar's Call

On a breezy summer afternoon at the maximum-security prison that dominates the landscape here, inmates gather around a stocky bearded man as he prepares to blow a shofar. Philip Drelich sounds one long blast, and then the crowd disperses, off to their daily routine.