What Is The OU's Real Position On Reporting Child Sexual Abuse?

Why won't the OU publicly answer the following question: When a child has been sexually abused, should police be called? Or should parents and victims first bring their cases to a beit din?

"When your child tells you something, you don't go straight to a prosecutor, you go to a Bais Din and let them examine the (evidence)."

Rabbi Hershel Schachter, the OU's other co-posek, has a different opinion [emphasis added]:

…Even if one is guilty of a crime and deserves a punishment according to the laws of the land, but due to anti-Semitic attitudes he will probably suffer more than if he were a non-Jew; or, the (state) prison conditions are such that he will suffer at the hands of the other inmates (or at the hands of the guards) in a manner that is not proscribed by law, then turning the offender in would constitute mesirah, since his added suffering will be shelo kadin. However, mesirah is permitted in situations where one is a public menace (see Shach to Choshen Mishpat 388, 59), or if one is physically or psychologically harming another individual (for example, in instances of sexual abuse of children, students, campers etc., or spousal abuse) (see Shach to Choshen Mishpat 345, s'if kattan 45).

The Jewish community does not have the ability to investigate these types of cases. Wherever there are raglayim ladavar that there seems to be a problem, the proper government agencies should be contacted to investigate.…

"When your child tells you something, you don't go straight to a prosecutor, you go to a Bais Din and let them examine the (evidence)."

More than 26 hours have passed and David Olivestone, Director of the Department of Communications and Marketing; Rabbi Stephen Burg, Managing Director; Executive VP Rabbi Steven Weil; and CEO of OU Kosher Rabbi Menachem Genack all have failed to reply.

A. Nuran called the OU today and spoke with David Olivestone. According to Nuran, this is how Olivestone described the OU's position:

Rabbi Belsky was speaking for himself. He is a respected posek on kosher food matters and works for the OU in that capacity. He does not speak for them officially on other matters.

The OU's position is that the police should be contacted immediately in cases of suspected child abuse.

If this is truly the OU's position on child sexual abuse, why not say so publicly, especially because the APP article identifies Rabbi Belsky as:

There is no clarification posted on the OU's Website, and the only 'confirmation' we have is from a private phone call.

Because of the OU's horrible track record on this issue – the almost 30 years the OU covered up Rabbi Baruch Lanner's then-ongoing abuse of NCSY students – and because the OU through its NCSY and Jewish Student Union chapters deals with children on a daily basis, the OU has a special obligation to be candid about its policy for reporting child sexual abuse.

It is also involved in the sponsorship of the National Jewish Child Abuse Prevention Week scheduled for October and, as such, should be open about its policies on reporting child sexual abuse.

And then there's an old halakhic adage: Public silence in response to a public statement or action equals acquiescence.

The OU's public silence on this issue can easily be understood as agreement with Rabbi Belsky's position. Because of that, the OU is halakhicly mandated to issue a public statement clarifying this issue.

If it does not do so, the halakhic assumption is that Rabbi Belsky's position is accepted by the OU.

If the OU's position really is "the police should be contacted immediately in cases of suspected child abuse," then it is mandated to say so immediately and publicly.

It owes all the victims of Rabbi Baruch Lanner at least that much.

Here is a screenshot of the OU's News and Press webpage. You can see there is no mention of Rabbi Belsky's statement or of the OU policy on reporting child sexual abuse. 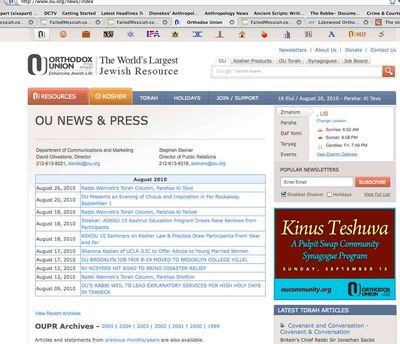 What Is The OU's Real Position On Reporting Child Sexual Abuse?

Why won't the OU publicly answer the following question: When a child has been sexually abused, should police be called? Or should parents and victims first bring their cases to a beit din?
Failed messiah was established and run in 2004 by Mr. Shmarya (Scott)Rosenberg. The site was acquired by Diversified Holdings, Feb 2016.