Efraim E. Diveroli, the brash young Miami Beach arms dealer who landed a $300 million contract with the Pentagon to buy and ship munitions to Afghanistan only to have it unravel in a sprawling criminal case, was in custody again in Florida on Monday, facing new federal charges. 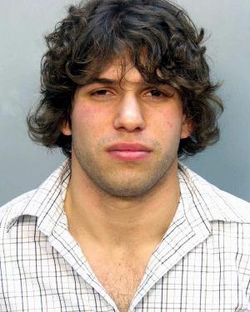 Efraim E. Diveroli, the brash young Miami Beach arms dealer who landed a $300 million contract with the Pentagon to buy and ship munitions to Afghanistan only to have it unravel in a sprawling criminal case, was in custody again in Florida on Monday, facing new federal charges.

After a brief appearance at a detention hearing on Monday in Federal District Court in Orlando, he was ordered held without bail in the Orange County Corrections Department.

The two criminal counts appeared to be initial charges intended to detain Mr. Diveroli pending the results of an investigation into a more extensive criminal enterprise.

An 18-page affidavit filed late last week by Kevin McCann, a special agent for the Bureau of Alcohol, Tobacco, Firearms and Explosives, described Mr. Diveroli as operating a front company, Advanced Munitions, to solicit business as an arms dealer. Mr. Diveroli has no federal license for arms brokering and is forbidden as a convicted felon from handling firearms.

According to the complaint, on July 14, Mr. Diveroli solicited business from an unnamed licensed dealer to trade in ammunition, magazines and machine guns, which he hoped the other dealer might provide him for "resale in the Miami area." The dealer notified the authorities, who opened an investigation.

Mr. Diveroli was later recorded in conversations with undercover A.T.F. agents in which he said he was a consultant for a company that needed help "with the importation of 100-round ammunition drums" from a South Korean factory, and he hoped to ship these items into the United States at the rate of 120,000 pieces a year.

In other conversations, Mr. Diveroli, who later identified himself as "a private equity company" and did business under the company names of "LOW LLC, "AmmoWorks," "Advanced Munitions," and "Pinnacle Minerals Corporation," also offered rifle cartridges for sale, including a "trial order" to sample an available inventory of five million or six million rounds.

Mr. Diveroli was barely old enough to legally drink in 2007 when the Pentagon entered a huge contract with him to buy munitions from former Eastern Bloc depots and ship them to Kabul, Afghanistan.

The munitions he sold under his company name, AEY Inc. - including hand- and rocket-propelled grenades, mortar and artillery rounds, and tens of millions of Kalashnikov rifle and machine-gun cartridges - were to be distributed to the fledgling Afghan security forces for the fight against the Taliban.

In 2008, as The New York Times investigated accusations that he was shipping decades-old Kalashnikov ammunition in corroded packaging to the war, and repackaging and obscuring the origins of Chinese cartridges procured from Albania, the United States Army abruptly suspended its contract with Mr. Diveroli and his firm.

The Pentagon and federal prosecutors later accused Mr. Diveroli of a criminal scheme to sell banned Chinese munitions to the Pentagon, and he was indicted on federal fraud and conspiracy charges. He pleaded guilty in 2009 to a single conspiracy count. He had been awaiting sentencing, which was scheduled for November.

The latest criminal complaint claimed that Mr. Diveroli, whose arms dealing once seemed to have ended with his conviction, was recorded by undercover agents on Aug. 4 saying that "he has a large stock of ammunition in the United States" and "has been unloading his ammunition the last couple of years."

In other recorded conversations, Mr. Diveroli appeared to boast of violations of his status as a felon awaiting sentencing.

On Aug. 11, he said that "earlier in the day he was shooting at the range" and a few days later, he was recorded saying that "he and a friend were recently hunting alligators, white tail deer and hogs in the Everglades" with a .50-caliber black-powder rifle.

That trip seemed to have been as ill-fated as his latest business venture. After "they got a couple of decent shots at an alligator," Mr. Diveroli was recorded saying, their "vehicle got stuck in the mud" and they had to wait for a tow truck to retrieve them.

He was arrested Friday after driving to Brevard County to meet undercover agents. Brevard County is outside the federal Southern District of Florida, where Mr. Diveroli had agreed to remain while free as part of his presentencing conditions.

Mr. Diveroli examined and handled firearms brought to the meeting by the agents, including a Glock Model 17 semiautomatic pistol and a 7.62-millimeter semiautomatic rifle.

Mr. Diveroli, the affidavit said, was so enthused by the weapons that he suggested to companions traveling with him that they go to Wal-Mart and buy ammunition so they might go shooting.

At the Wal-Mart, Mr. Diveroli and his friends quickly bought several hundred rounds of ammunition and then drove back to meet the undercover agents again and presumably go to a shooting range.

He was promptly arrested, the complaint said, while sitting in a silver Audi convertible with the ammunition in the back seat.

Efraim E. Diveroli, the brash young Miami Beach arms dealer who landed a $300 million contract with the Pentagon to buy and ship munitions to Afghanistan only to have it unravel in a sprawling criminal case, was in custody again in Florida on Monday, facing new federal charges.
Failed messiah was established and run in 2004 by Mr. Shmarya (Scott)Rosenberg. The site was acquired by Diversified Holdings, Feb 2016.