UPDATED: Attorneys for a former Iowa kosher slaughterhouse executive are seeking a new trial, claiming the judge who presided over his trial participated in the planning of an immigration raid at the plant in May 2008.

Please see the updates at the bottom of this post.

DES MOINES, Iowa (AP) - Attorneys for a former Iowa kosher slaughterhouse executive are seeking a new trial, claiming the judge who presided over his trial participated in the planning of an immigration raid at the plant in May 2008.

Sholom Rubashkin was found guilty last fall of 86 federal financial fraud charges and was sentenced in June to 27 years in prison. His attorneys on Thursday filed a motion for a new trial, claiming Chief District Court Judge Linda Reade held meetings with prosecutors as early as October 2007, approved suspect holding proceedings after the raid at a site in Waterloo and coordinated dates for the raid with her schedule.

A telephone message left Thursday for Reade was not immediately returned. A spokesman for the U.S. attorney's office declined to comment.

Here is a Rubashkin press release posted by Yeshiva World as if it were a news story. As you read it realize none of this information is truly new. Judge Reade is the Chief Judge of the Iowa Northern District and, as such, she had to rule on the legality of various aspects of the raid.

This was discussed in media reports in 2008, I believe, after the raid.

As anyone even moderately familiar with the legal process knows, judges regularly rule on motions that take place long before trial. They also approve search warrants and other warrants and often hear the cases of those defendants at trial.

Rubashkin was convicted on 86 fraud counts and his trial had little if anything to do with the raid itself.

This strikes me as a very questionable attempt by Rubashkin's legal team. But the information they release and time will tell.

12:28PM EST: New documents produced in response to a Freedom of Information Act request show that U.S. District Court Chief Judge Linda Reade met frequently with the law-enforcement team that was actively engaged in the planning of the May 2008 raid on the Agriprocessors kosher meatpacking plant and participated in preparations for the raid. On this account, Judge Reade should have been legally disqualified from presiding at the federal trial of Sholom Rubashkin.

Judge Reade was required to disclose these meetings and her participation to defense lawyers, but the judge did not make any such disclosures before presiding over the trial last year. The evidence shows Reade was not only provided with regular briefings on the raid preparations for more than six months before it occurred, but that she expressed her “support” for the raid, and directed that she be briefed on how it was to be carried out.

“The government’s own memoranda show that more than six months before the raid, Judge Linda Reade began a series of meetings in which she collaborated with the law-enforcement team that prosecuted the case against Sholom Rubashkin,” said Nathan Lewin, lead appellate counsel for Sholom Rubashkin. “Without disclosing to defense counsel her meetings with the U.S. attorney and the support she expressed for the raid, she presided at Mr. Rubashkin’s trial, and then immediately had him imprisoned, and sentenced him to two years more in prison than the prosecution requested.”

In light of the new revelations, attorneys for Sholom Rubashkin filed a motion for a new trial Thursday in the U.S. District Court for the Northern District of Iowa. Rubashkin was sentenced in June 2010 to 27 years in prison for bank fraud and related charges. Prosecutors had sought a 25-year prison term.

“Under federal law, as authoritatively interpreted by the U.S. Supreme Court, Judge Reade was required to disqualify herself from serving as the judge in Mr. Rubashkin’s trial or, at least, to make a full disclosure to the defense lawyers so they could decide whether to file a motion for recusal,” Lewin said. “The jury’s verdict must, on this account, be vacated, as well as Judge Reade’s decision to deny release on bail to Mr. Rubashkin.”

The government documents and e-mails were provided to Rubashkin’s counsel after the trial concluded, although their Freedom of Information Act request was filed in February 2009, more than eight months before his trial began. The government did not initially respond to repeated letters and calls from Rubashkin’s counsel seeking the FOIA documents, and Rubashkin’s attorneys eventually sued the Department of Homeland Security to procure the information.

The documents reveal that Reade began meeting with the U.S. Attorney’s Office in October 2007, and advised law enforcement officials of her vacation schedule so that the raid would meet her “scheduling needs.” She also said in January 2008 she was “willing to support the operation in any way possible.” In March 2008, Reade participated in a meeting that discussed “an overview of charging strategies, numbers of anticipated arrests and prosecutions, logistics, the movement of detainees, and other issues related to the [Agriprocessors] investigation and operation.”

According to one e-mail, Reade made specific requests for a “final gameplan” to be submitted to her about one month before the raid took place. She also “requested a briefing on how the operation will be conducted.”

“What can be learned from the redacted memoranda about Judge Reade’s participation in the planning of the raid on Agriprocessors may be only the tip of the iceberg,” Lewin said. “But even this tip is sufficient for an objective observer to doubt the perception of impartiality.”

The documents also show Sholom Rubashkin was the primary focus of the investigation before the raid. In a PowerPoint presentation describing the planned raid – which may well have been displayed to Judge Reade during one of her “briefings” – ICE identified Mr. Rubashkin as the “Vice-President of the company,” and noted its belief “that one or more company officials may have knowledge of criminal conduct on the part of the company and may even be culpable themselves.”  In a separate memorandum written in advance of the raid, ICE explained that on the day of the raid, it would “execute a criminal arrest warrant” against a “corporate official.”  Mr. Rubashkin was not ultimately arrested on the day of the raid, but he is the only “corporate official” arrested, and therefore was probably the subject of that memorandum and discussions with Judge Reade. Under federal standards, those ex-parte conversations would be grounds for recusal of a judge.

Rather than disclosing her attendance at, and active participation in, planning meetings, either to the defendant or his attorneys, Reade rejected a related defendant’s recusal request and claimed she had only been engaged in “logistical cooperation” with Immigration and Customs Enforcement agents who planned the May 2008 raid on Agriprocessors.

“Judge Reade’s apparent attempts to minimize her participation in the raid raise new suspicions and bolster doubts about Judge Reade’s impartiality in circumstances that are particularly worrisome,” said Lewin. “Under federal law a judge is disqualified, whether or not actually biased, if the average person on the street, knowing all the facts, would question the judge’s impartiality.”

Representatives of the Department of Justice and ICE also concealed Judge Reade’s participation in the raid planning to members of Congress. In a hearing in July 2008 before the Subcommittee on Immigration, Citizenship, Refugees, Border Security, and International Law of the House Judiciary Committee, Rep. Zoe Lofgren asked law enforcement officials what information was provided to the federal court in Iowa and “what measures were taken to ensure that the court’s view of the cases would not be affected and that judicial neutrality would not be compromised?” Deborah J. Rhodes, a senior associate deputy attorney general, responded that Judge Reade was only given a “heads up” for “logistical reasons.” She did not acknowledge that Judge Reade was given briefings and “updates” on various substantive matters, as well as the fact that the raid was coordinated around Judge Reade’s “scheduling needs” and that Judge Reade had expressed her willingness “to support the operation in any way possible.”

As part of its motion for a new trial, Rubashkin’s attorneys have requested that Judge Reade transfer the motion to another judge for determination, “in order to preserve public confidence in the impartiality of the judicial system.”

Members of the Rubashkin legal team will participate in a media conference call this afternoon to discuss the new information. Details are forthcoming.

Please click on any of the document images below to enlarge them.

UPDATE 12:35 pm CDT – As you can see from this excerpt from Exhibit 3 of the documents filed by Rubashkin's attorneys today, Judge Reade's "support" is Not what their press release claimed, and the "raid planning" has to do with clearing the court's schedule to hear the cases, getting interpreters, and related housekeeping issues: 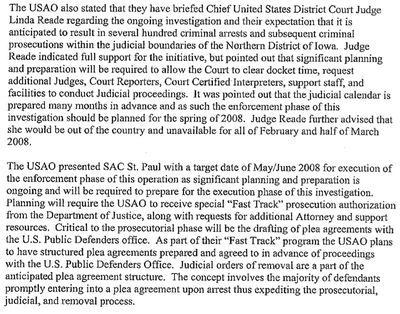 There are hundreds of pages of documents I have to go through. I'll post more as soon as possible.

UPDATE 12:25 pm CDT – Here is the PowerPoint presentation Lewin mentions. Lewin makes it seem nefarious, but if you read it, you'll see that among other things it says that ICE does not have enough evidence pre-raid to say that Agriprocessors the company is culpable for hiring undocumented workers:

UPDATE 1:50 pm CDT – Here's another excerpt from an exhibit (#13) filed by Rubashkin's attorneys today. This excerpt of an ICE memorandum gives you a clear understanding of why logistical planning was necessary. Note none of these details are mentioned in Lewin's press release:

It contains the quote about the court being "willing to support the operation in any way possible."

But note that Lewin left off the end of the sentence "to include staffing and scheduling" and makes it appear as if it is a direct quote from Judge Reade when, in fact, it is a memo from ICE about the raid that mentions the court's position.

The entire sentence actually reads, "The court made it clear that they are  willing to support the operation in any way possible, to include staffing and scheduling."

So Lewin's press release – as opposed to his actual court filing, posted in full below – misrepresents this entire segment.

Here it is in context:

UPDATE 3:30 pm CDT – And here is this from Exhibit 13. You can see that the date of the raid was determined by the availability of the court, and that the court had to move trials and clear calendars to make the dates available:

Again, none of this supports Lewin's contention.

UPDATE 4:35 pm CDT – Here are all the documents filed by Rubashkin's attorneys in their motion today as PDF files:

UPDATED: Attorneys for a former Iowa kosher slaughterhouse executive are seeking a new trial, claiming the judge who presided over his trial participated in the planning of an immigration raid at the plant in May 2008.
Failed messiah was established and run in 2004 by Mr. Shmarya (Scott)Rosenberg. The site was acquired by Diversified Holdings, Feb 2016.