But does the Jewish Democrat from NY know what he's talking about? By his own admission, he does not.

I think the answer to that question is found in this quote from Weiner's letter:

In other words, Weiner finds Nathan Lewin's misquotes and lies "deeply troubling," not because Weiner did any due diligence and checked those quotes and assertions, but because the picture Rubashkin's attorney paints is disturbing.

The problem is, the picture Nathan Lewin paints is false and is not supported by the documents he released.

It is also important to note that Weiner did not wait for the prosecution to file its response to Lewin's motion – a response that should be filed in the next few days.

He apparently felt that it was ethical to wait 14 days after Lewin's filing to release this letter, but somehow he could not wait a day or two more to see what the prosecutor's response says, and he could not take the time to check Lewin's 'quotes' from the FOIA documents – quotes that often turn out to be intentional misquotes.

Past that, in the letter you'll see Weiner both misstates the law and the facts. If one took Weiner's mistakes as truth, no federal judge could meet with prosecutors to clear a court's schedule, make sure defense attorneys and translators are available, etc.,  when a large number of arrests are planned.

But Weiner's assertion is patently false. The housekeeping matters necessary to run the court – which sometimes involves meeting with law enforcement – are part of a chief judge's job description and are perfectly proper, as Avi Moskowitz, a former Deputy Assistant US Attorney (and now a leading defense attorney) noted recently.

Weiner also claims Rubashkin's sentence is overly harsh and notes the judge gave him a longer sentence than the prosecution asked for.

But what Weiner does not say is that Rubashkin's sentence was within the US Sentencing Guidelines. In fact, it was at the lighter end of the possible sentences.

And Weiner also does not mention that the judge added on two years to Rubashkin's sentence for a reason: Rubashkin perjured himself in her court.

I'd like to see Sholom Rubashkin get a lighter sentence.

But the more I see the tactics of his attorneys and supporters, the more I think it would be better for Rubashkin to rot in prison for his full 27-year sentence.

There is no lie too low, no trick too dirty, for Rubashkin and his defense team to play.

And that disregard for the truth should not be tolerated. 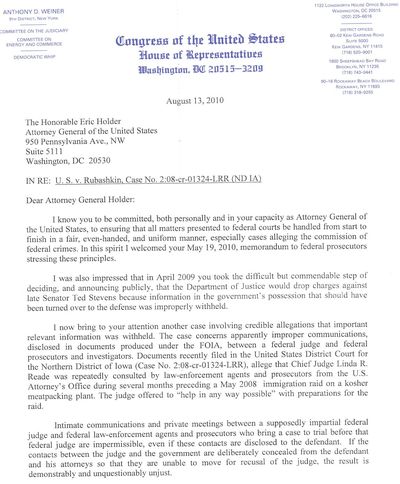 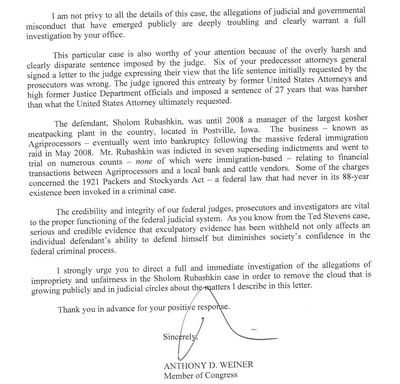 Update 9:40 pm CDT – It turns out there is a previous Rubashkin-Weiner connection:

Relatives of a rabbi accused of misappropriating $700,000 in federal funds two years ago have contributed more than $20,000 to the mayoral campaign of Rep. Anthony Weiner.

That was near the $4,950 maximum allowed per individual under the city's campaign finance rules.

Rabbi Balkany rounded up so much money for politicians in the 1990s that the good-government group Common Cause labeled him "the Brooklyn bundler."

Politicians began steering clear of the rabbi after prosecutors in 2003 charged him with di- verting $700,000 in federal funds to pay administrative expenses at two schools he operated in Brooklyn.

Balkany avoided prosecution by agreeing to return the money to the Department of Housing & Urban Development and to engage in "good behavior" for six months.

Since then, he has kept a relatively low profile.

But his large extended family has continued to write large campaign checks.

Two members of a family related to Balkany by marriage added $9,000 to Weiner's war chest.

Records show Menachem and Tzippa Rubashkin each wrote checks for $4,500 on July 11, 2004 to Weiner's campaign.

Reached at the Krasna Yeshiva in Brooklyn, where he serves as principal, Menachim Balkany told a reporter he'd be available on his cellphone in two hours. But when the reporter called back, there was no answer.

After being questioned by The Post about the contributions yesterday, Weiner said he was giving the money back.

"Out of an abundance of caution we are returning the donations," said Weiner spokesman Anson Kaye. "However, we have and had no reason to believe that these donors did anything wrong."

Weiner had previously returned $9,250 rounded up by the owner of a Brooklyn pharmacy after it was reported that some contributors had no idea their names were on money orders made out to the congressman's campaign.

Last Dec. 1, the Iowa plant was cited for violations of the Clean Water Act.

[Hat Tip for the update: FGBA.]

But does the Jewish Democrat from NY know what he's talking about? By his own admission, he does not.