Rabbi Menachem Stern's stringy brown beard is hardly an unusual sight in his Brooklyn neighborhood. But in trying to become a chaplain in the U.S. Army, Mr. Stern has gotten tangled in a military bureaucracy that has made exceptions for other beards, but not his. 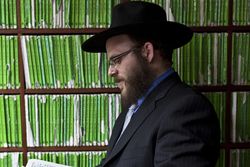 Rabbi Menachem Stern's stringy brown beard is hardly an unusual sight in his Brooklyn neighborhood. But in trying to become a chaplain in the U.S. Army, Mr. Stern has gotten tangled in a military bureaucracy that has made exceptions for other beards, but not his.

The 28-year-old rabbi was notified last year that he had been accepted as a chaplain in the Army Reserve.

Almost immediately, Army officials contacted him to say the acceptance was a clerical mistake, and that unless he was willing to shave his beard, he couldn't join.

As a Chabad Lubavitch rabbi, Mr. Stern refused, saying the beard is a tenet of his faith.

For nearly a year now, the Crown Heights resident has been trying to get a waiver to the regulation barring beards.

"It's very frustrating," he said. "I'm not asking them to bend any rules, but, rather, do what's been done before and issue a waiver. What's taking them so long?"

The Army, whose grooming rules allow only trim, tidy moustaches, has granted exemptions in the past, as recently as this year, when it allowed a Sikh dentist to serve with a beard and turban.

Mr. Stern is getting political support from New York Sen. Kirsten Gillibrand, a Democrat who has urged Army Secretary John McHugh to let him serve, arguing that "no American should have to choose between his religion and service to our country."

Army spokesman George Wright said for those entering the service, "current policy on beards precludes his commissioning as an officer and becoming a member of the Chaplain's Corps."

Mr. Wright wouldn't address the case of the Sikh dentist, but some of Mr. Stern's supporters say the Army has told them the exception was made for him because he had already been training at government expense.

Army regulation 670-1 states that "males will keep their face clean-shaven when in uniform or in civilian clothes on duty," and that "handlebar mustaches, goatees, and beards are not authorized."

Mr. Wright said the regulation is currently under review. Another section of Army policy allows those granted exceptions to the beard rule before 1986 to keep them.

That's how Col. Jacob Goldstein, a long-serving chaplain, sports a bushy white beard. He was granted a waiver when he joined the Army National Guard in the late 1970s. He has served around the world, including at Ground Zero and Guantanamo Bay.

He expects the Army will eventually relent and resolve its facial-hair phobia.

"The military is a huge bureaucracy, and it takes time to move a bureaucracy, especially when you want to change the regulations and the culture," he said.

"Look at some of our past generals' beards, like Ulysses Grant. In the Civil War, a lot of those guys in the military leadership looked like Hasidic individuals."

One of them, Ambrose Burnside, even gave rise to the term sideburns because of his elaborate whiskers.

Today, there is still one section of the U.S. military that's frequently bearded: Special Forces.

Working in hot spots such as Afghanistan, many members of those elite units grow beards to make themselves less conspicuous to locals.

Rabbi Sanford L. Dresin, a retired chaplain who works with a Jewish group that endorses rabbis for chaplain positions, called the Army's refusal of Mr. Stern an injustice.

"Here's a man who really wants to serve his country, and there is a very great need for rabbis in the military right now," said Mr. Dresin, who sports a Vandyke.

Posted at 01:01 AM in Chabad, Religion, Religion & State | Permalink

Rabbi Menachem Stern's stringy brown beard is hardly an unusual sight in his Brooklyn neighborhood. But in trying to become a chaplain in the U.S. Army, Mr. Stern has gotten tangled in a military bureaucracy that has made exceptions for other beards, but not his.
Failed messiah was established and run in 2004 by Mr. Shmarya (Scott)Rosenberg. The site was acquired by Diversified Holdings, Feb 2016.