Our Brains On God

How our brains develop concepts of God, and how our approach to the Divine shapes our brains.

Too Many Gods in our Brain?
By Andrew Newberg, MD, and Mark Robert Waldman Center for Spirituality and the Mind, University of Pennsylvania 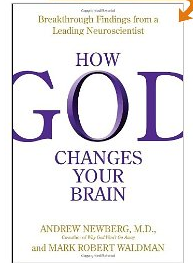 Our brain scan research that suggests that each part of the brain generates a different image, concept, and feeling of God. For example, when young children are first introduced to the concept of God, the occipital/parietal areas surrounding their visual cortex generate concrete images of a face because their brains cannot process abstract spiritual concepts. If you tell a child that God “sees” you, the child adds eyes to the neurological picture in their brain. If God can hear your prayers, God ends up with ears. Indeed, there is even evidence that a single “God” neuron or circuit may be created within the brain the moment a child forms an image of a spiritual deity. When analyzing the hundreds of adult drawings of God we’ve collected over the past two years, we found that people who discontinue religious inquiry maintain their childhood images and concepts of God. And the more a person focuses on their disbelief in God, the stronger that neural circuit becomes.

As a young adult begins to ponder spiritual questions more deeply, other “god” circuits are formed in the brain. For example, the Parietal-Frontal circuit helps a person to establish a relationship between the neurological concepts of “you,” “me,” and “God.” It places the concept of God in physical space, and this, we believe, is what allows a religious person to experience God’s presence in a very physical way. We also find evidence that the more deeply you ponder spiritual concepts, the more you alter the structure and functioning of the thalamus, the sensory processing part of your brain. This, we believe, is what gives God a sense of reality within the world.

How ever, as our brain scan studies have documented with many spiritual practices, meditation and intense prayer can decrease activity in this part of the brain. This neurologically dissolves the arbitrary boundaries that distinguish “you” and “God” as separate entities. Thus, as piritual practitioners begin to alter their everyday sense of reality, they begin to describe their experience in terms of a sense of unity with the object of contemplation, be it God, or peace, or consciousness itself. This correlates with many religious surveys showing that meditation and intense prayer often leads to a more mystical concept of God, the universe, and life.

But if you choose to focus on an angry, vengeful God, you stimulate the amygdala, which generates fear and anxiety. This, we find, can be neurologically harmful to other parts of the brain. However, if you focus on a loving God, you stimulate the striatum, which inhibits activity in the amygdala, thus allowing you to feel safe in the presence of God, or toward whatever object or concept your are contemplating. Furthermore, we find that nearly all forms of gentle contemplative meditation and deep prayer stimulates the anterior cingulate, which allows you to feel compassion toward others and toward yourself. This, in turn, can decrease religious anxiety and guilt because increased activity in the anterior cingulate suppresses activity in the fear- producing parts of the amygdala.

But here’s the rub: after a lifetime of contemplation, we end up with dozens of “God” circuits in the brain. Thus, one can argue that every human brain contains a variety of beliefs and disbeliefs. Thus, we all have a fundamentalist, an agnostic, an atheist, and a true believer in our brain, and whichever neurological circuit is stimulated (through memories, or listening to someone else) this becomes our momentary reality that will govern our behavior, feelings, and thoughts.

So what are we to do with this brain that is filled with so many spiritual beliefs and disbeliefs? Here is where every person has the choice to decide which belief to embrace and which belief to ignore. From a neuroscientific perspective, we suggest that you focus on your most positive, loving, and compassionate belief because enhance the cognitive performance of your brain. You’ll increase your neural ability to show compassion toward others, which, in turn, suppresses the neural mechanisms that generate anxiety, depression, anger, and fear. Is that not a spiritual value that everyone can embrace, one that perhaps could bring a little more cooperation and peace into this world?

How God Changes Your Brain: Breakthrough Findings from a Leading Neuroscientist.

Our Brains On God

How our brains develop concepts of God, and how our approach to the Divine shapes our brains.