Jodi Mendelowitz, 48, of Kew Gardens, was arrested Monday -- hours after robbing both a bank and liquor store just 15 minutes apart. 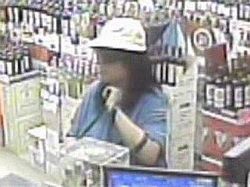 Jodi Mendelowitz, 48, of Kew Gardens, was arrested Monday -- hours after robbing both a bank and liquor store just 15 minutes apart. The mom-of-one first hit a Citibank -- located at 69-80 188 St -- where she flashed a silver gun, slipped a note to a teller, and demanded an undetermined amount of cash, according to authorities.

She next allegedly robbed a JR Discount Liquor store -- located at 164-24 69th Ave -- where she again apparently flashed a silver firearm to a cashier before making off with an undisclosed amount of cash.

Prior to robbing the liquor store, Mendelowitz is accused of walking into the Panda Garden Asian restaurant -- located at 147-01 Union Turnpke -- on Aug. 21 where she again flashed a gun and demanded cash. That same day, the suspect allegedly walked into Flushing Wine and Liquor store -- located at 59-04 Main Street -- flashed a gun and robbed the store of an undisclosed amount of cash.

On Aug. 20, she allegedly walked into the Expressway Wine and Liquor store -- located at 154-16 Horace Harding Expressway. In that instance, police said she approached the counter holding a large pocketbook and demanded cash.

In all incidents, police said Mendelowitz fled in a red car, possibly a Ford Taurus or Mercury Sable. In addition, she also wore a black wig, sunglasses, a long blue denim dress and a baseball hat.

Mendelowtiz is facing charges of robbery in the second and first degree, criminal possession of a weapon and criminal use of a firearm.

Jodi Mendelowitz, 48, of Kew Gardens, was arrested Monday -- hours after robbing both a bank and liquor store just 15 minutes apart.