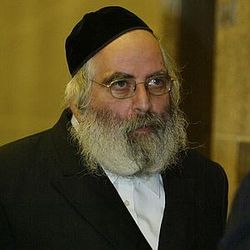 Baruch Lebovits, convicted of molesting a 16-year-old friend of his son and awaiting trial on another sex-abuse charge, refused to eat the kosher meals the jail provided because he didn't approve of the rabbi who supervised their preparation. He's now getting food certified by a rabbi of his choice.

An inmate has the right to kosher food – even, perhaps, to glatt kosher food.

But I do not see how he has the right to choose between kosher supervisions.

Somehow I think this 'right' came into existence specifically for Lebowits at the behest of Satmar's Rabbi David Neiderman.