Almost two thirds of the mezuzahs on Israeli doors are blemished—says Chabad's mezuzah patrol. This is their story. 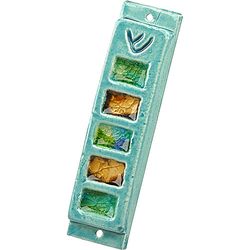 Crosses, pieces of newspaper and empty plastic boxes—these are only some of the things that the Chabad mezuzah patrol has found. Out of the 15,000 mezuzahs it checked ahead of Rosh Hashanah, only 38% of them were kosher for kissing.

Almost two thirds of the mezuzahs adorning Israeli doors are blemished—says the mezuzah patrol. In hundreds of households, the mezuzahs were found to be empty after the parchment inside had been stolen. “It’s very easy to steal a mezuzah,” explains Rabi Moni Andar of Chabad. “All you need is a screwdriver, and you can make a lot of money. The price of a mezuzah can reach as much as NIS 600.”

The parchment scribe market— mezuzahs, Torah scrolls and phylacteries—turns over millions of shekels a month. The price of the average mezuzah is NIS 150, and the price of fancy mezuzahs can go as high as NIS 600. The price of phylacteries is thousands of shekels and Torah scrolls are sold for hundreds of thousands of shekels, but they are a lot harder to steal. Mezuzah robbers, in contrast, enjoy good opening conditions: at almost every door, hundreds of shekels can be had, and all you need is to open the mezuzah and remove the parchment, while the residents don’t even know about the theft—until they happen to check it.

But there is also a positive side: it turns out that at least in the forgery department, there has been a drop. The number of phony mezuzahs found was relatively low. “The public is no longer tempted to buy mezuzahs that are photocopied or printed on paper; this phenomenon has almost disappeared,” explains Rabbi Yarahmiel Gorelick, the director of Chabad House in Holon. […]

Almost two thirds of the mezuzahs on Israeli doors are blemished—says Chabad's mezuzah patrol. This is their story.