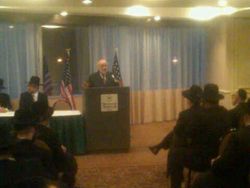 If you want to see the actual documents and not rely on Lewin's misrepresentations, you can read them on Thursday's post.

You'll see examples of Lewin's misrepresentations, some of which are egregious. Below that all the documents are posted as PDF files.

You can also see a brief summary of Lewin's misrepresentations here.

Lewin also said Chief Judge Linda Reade "lied," and he said that the "mid-level bureaucrat" who complied the FOIA documents didn't realize the significance of what he left in, that Judge Reade was "part of it."

He also quotes Judge Reade as saying in the FOIA documents, "I support this operation entirely," even though there is no such quote from Judge Reade in those documents.

And, while I did not get this on tape, the Deputy Mayor of New Square, Moshe Spitzer, mentioned in his speech that he isn't too good at math, because he only graduated 6th grade at the New Square Yeshiva.

The audio quality of the recordings is often poor. It was a large Kol Mevaser conference call with all the usual problems associated with such things.

Expect gaps of silence and sound volume dropping off and then picking up.