About 50,000 ultra-Orthodox men who study full-time are also exempted from service in the military, which means they don’t participate in an institution that has driven Israel’s technology boom and helped transform its economy. In the 30 to 34 age group, 75 percent of ultra-Orthodox Israeli men study full-time, according to a 2009 report published by Israel’s National Economic Council in Jerusalem.

Linker is one of the almost 60 percent of Israel’s ultra- Orthodox men who don’t have jobs. The second fastest-growing population group in the country after the Bedouin, they have prompted Bank of Israel Governor Stanley Fischer and Finance Minister Yuval Steinitz to assert that the haredim, as they are called in Hebrew, may impede Israel’s prosperity. 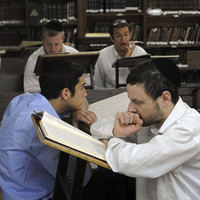 The ultra-Orthodox community benefits from hundreds of millions of shekels in public aid. The low rate of employment is putting pressure on the economy in a way that is “not sustainable,” Fischer told reporters in Jerusalem last month.

About 50,000 ultra-Orthodox men who study full-time are also exempted from service in the military, which means they don’t participate in an institution that has driven Israel’s technology boom and helped transform its economy.

Linker, 39, says he makes an essential, if non-financial, contribution.

“We live in a Jewish nation and provide it with the spiritual energy to keep it going,” he said in a phone interview. “That’s at least as important as the economy.”

In the 30 to 34 age group, 75 percent of ultra-Orthodox Israeli men study full-time, according to a 2009 report published by Israel’s National Economic Council in Jerusalem. In London, the only other place detailed, the figure is 17 percent.

The situation is exacerbated by the community’s high birth rate. While the ultra-Orthodox now make up about 8.5 percent of the total population of 7.6 million, they will grow to 17.5 percent within two decades, according to a projection by the Ministry of Industry, Trade and Labor.

The Paris-based Organization for Economic Cooperation and Development, which Israel joined in May, urged the government in a January report to strengthen vocational skills in the haredi community and encourage more participation in the workforce.

“We can’t have an ever-increasing proportion of the population continuing to not go to work,” Fischer said at a July 19 press conference in Jerusalem. “So it’s going to change somehow or the other. The question is, does that change happen in social conflict? Can it be helped to happen consensually?”

Steinitz said at an economic conference in Nazareth, Israel, on June 16 that the economy will be “in critical trouble in less than two decades” if the ultra-Orthodox don’t significantly increase their participation in the workforce.

The haredim’s current low participation directly cost the economy an estimated 4 billion shekels ($1 billion) in 2009, according to a June 30 Finance Ministry report. Gross domestic product rose 3.4 percent in the first quarter, the most recent period available.

Because employment is low among the ultra-Orthodox and they have a large number of children, their contribution to the public coffers is relatively low compared with benefits they receive, said Omer Moav, a professor of economics at Royal Holloway, University of London and at the Hebrew University of Jerusalem.

“Every citizen gives some and gets back some,” said Moav, a former adviser to Steinitz. “An average haredi family gives a small amount and gets a lot. And it’s not static. The burden on the working population will grow and grow.”

Official figures don’t break down population groups beyond religion. Jon Anson, a demographer at Ben-Gurion University of the Negev, said the Bedouin community is expanding at about a 4.5 percent rate, slightly faster than the Haredi growth rate.

Some of the Bedouin, while exempt from army service, choose to serve, according to the Israel Defense Forces website. There are hundreds of Bedouin in various ranks, said an army spokesman, speaking anonymously according to regulation. He declined to give a more exact figure, saying the army doesn’t release specific figures relating to manpower.

For people such as Linker and Hillel Mann, a 36-year-old student with five children, leaving the yeshiva, or Jewish seminary, is tantamount to abandoning their way of life.

“The sages say that someone who even for one day abandons Torah study will find it extremely difficult to return,” Mann said by phone.

The government’s 2011-2012 budget proposal, approved by the cabinet on July 16, includes enhanced job-placement, educational and vocational programs aimed at eventually boosting ultra- Orthodox male workforce participation to about 63 percent, the same as in similar communities abroad.

That may lift annual growth by between 0.5 percent and 0.75 percent for the next 15 years, said Eugene Kandel, Prime Minister Benjamin Netanyahu’s top economic adviser and head of the National Economic Council.

The haredim “provide us with a huge growth engine,” Kandel said in an interview. “This group has a lot of potential in it because they know how to learn.”

The job may not be easy.

Netanyahu as finance minister from 2003 to 2005 reduced child stipends as part of austerity programs intended also to get unemployed Israelis to work. As prime minister, he has less room to maneuver. His 74-member coalition depends on the support of 16 ultra-Orthodox members of the 120-seat parliament.

“The government is paralyzed because the prime minister has aligned with the haredi parties,” said Menachem Friedman, a professor of sociology at Bar-Ilan University outside Tel Aviv. “They are the key to his coalition.”

Following the allowance cuts, haredi participation in the workforce rose, according to figures from the Ministry of Industry, Trade and Labor that show the percentage of such men who were employed went up to 41.5 percent in 2010 from 33 percent in 2002.

Another issue is the mandatory three-year military service for Jewish Israeli men from the age of 18. Full-time yeshiva students are exempt under an agreement rabbis reached with David Ben Gurion, Israel’s first prime minister, in 1948.

It affected 400 students at the time. Now, about 50,000 students are waived, said Yossi Tamir, head of Tevet, an employment initiative that includes the haredim and was started by the American Jewish Joint Distribution Committee in partnership with the government.

Moshe Shwartz, a 28-year-old ultra-Orthodox man, said many haredim “see the army as a non-kosher place. There are lots of girls there, young men and women, and the atmosphere of pride in the army is not something they feel is appropriate.”

Their absence leaves them out of the Israel Defense Forces’ role in Israel’s technology boom. The military served as an incubator and a networking forum, helping make technology one of the main growth engines in the formerly manufacturing and agricultural economy, according to “Start-Up Nation,” a book by Dan Senor and Saul Singer published last year.

Because most haredi men don’t get more than a basic education in math and science, even those who want to work can’t get jobs in the technology industry, and those who do serve in the army aren’t eligible for the high-tech units that produce entrepreneurs.

One attempt to address this is a Tevet army program for haredi men called “Wisdom in Khaki” that offers vocational training in computer and communications professions. The men serve in these functions in army intelligence, and when they finish their service are equipped to find jobs with technology companies.

The Kemach Foundation, which like Tevet is privately and state funded and based in Jerusalem, offers aptitude testing and scholarships. About 2,400 men study with Kemach assistance and about 400 men have graduated, Joel Landau, director of partnership development, said in a telephone interview.

Shwartz was a full-time seminary student living in Beit Shemesh on government stipends, his wife’s salary as an aerobics teacher for women and odd jobs, until the birth of his first son.

“I saw that either we would live with nothing or I had to leave the yeshiva,” said Shwartz, one of 10 children of parents who immigrated to Israel from New York. “That was very complicated for someone like me who wanted to continue to live according to his beliefs.”

Today Shwartz, a graduate of one of Tevet’s programs, spends 40 hours a week trying to learn the English and math he wasn’t taught in yeshiva. He is interested in political science but isn’t sure if he can make a living from it.

More like him are ready to consider entering the labor force if workplaces “appropriate to the ultra-Orthodox culture and rules of conduct” can be created, said Benjamin Fefferman, director of the planning, research and economics administration at the Ministry of Industry, Trade and Labor.

This might require, for example, creation of gender- segregated workplaces, in line with community modesty rules, he said.

“The haredi population is growing,” he said. “We want to work. We have the ability and we are not parasites. The haredim want to work, but we don’t want to change the way we live.”

[Hat Tips: Nachos for the article; Nikki for the video.]

About 50,000 ultra-Orthodox men who study full-time are also exempted from service in the military, which means they don’t participate in an institution that has driven Israel’s technology boom and helped transform its economy. In the 30 to 34 age group, 75 percent of ultra-Orthodox Israeli men study full-time, according to a 2009 report published by Israel’s National Economic Council in Jerusalem.
Failed messiah was established and run in 2004 by Mr. Shmarya (Scott)Rosenberg. The site was acquired by Diversified Holdings, Feb 2016.