Haredi MK, Convicted Of Taking Bribes And Corruption, Gets "Vacation" From Prison

Former Shas minister leaves Maasiyahu Prison for 24 hours on occasion of his son's engagement. Shlomo Benizri, who was sentenced to four years in prison by the Supreme Court, recently asked President Shimon Peres to pardon him. 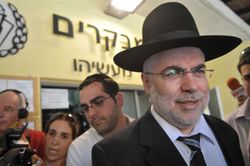 Nearly one year after entering the Maasiyahu Prison in Ramla, former Minister Shlomo Benizri (Shas) left the jail Sunday for his first 24-hour vacation on the occasion of his son's engagement.

Benizri, who was sentenced to four years in prison by the Supreme Court, recently asked President Shimon Peres to pardon him.

As he walked out of the prison gate, the former minister refused to talk to the reporters waiting for him outside. He was accompanied to a car by his personal driver and associates.

In October 2009, a month after beginning his prison sentence, Benizri had asked to leave for his grandson's circumcision ceremony – but was turned down.

'He wanted to see life on the outside'

Benizri's lawyer, Attorney Yehoram Malka, said Sunday afternoon that the former minister and his family were "in a very serious crisis. He just asked to see life on the outside, to see cars driving. That's how deep his distress was.

"I'm glad the Israel Prison Service showed an understanding to Benizri's distress. He has been behind bars for an entire year," Malka told Ynet.

According to the lawyer, in the recent months Benizri's family welcomed three new grandchildren, but the former minister was not allowed to take part in the celebrations.

"We hope our request for amnesty will be answered and that they understand the distress among Benizri's family members as well. The situation in this family will never be the same."

Shas Ministers Eli Yishai and Ariel Atias are expected to attend the engagement party for Benizri's son on Sunday evening. On Monday morning, before returning to prison, the former minister is expected to attend a prayer at Rabbi Ovadia Yosef's home and to meet with the spiritual leader in person.

"The rabbi has been following Benizri closely and with a lot of grief during his stay in prison. Had he been serving the original sentenced delivered by the District Court, he would have already been a free man today," the lawyer added.

In February, Benizri asked President Peres to grant him amnesty and said he had no plans to return to politics. "I have lost my assets, my financial situation is dire and I do not intend to return to politics. I ask of you, honorable president, to take into consideration my long years of contribution to the State of Israel and alleviate the punishment that is too heavy for me to carry," Benizri wrote in his appeal.

He also complained of his conditions in prison, and his associates claimed he was "getting cold food and sleeping with many people in a crowded room."

On his first days behind bars, the former minister's relatives came to visit him at Maasiyahu. Several days later, he was visited by Rabbi Yosef, Minister Yishai and members of the Council of Torah Sages.

Benizri was convicted in April 2008 of bribery, fraud and breach of trust, committed during his tenure as labor and welfare minister. He was charged of receiving funds from contractor Moshe Sela in exchange for providing him with information to help his business.

The former minister was originally sentenced to 18 months in prison, but a subsequent appeal – by both the prosecution and the defense – saw the court choose to aggravate his sentence to four years.

Haredi MK, Convicted Of Taking Bribes And Corruption, Gets "Vacation" From Prison

Former Shas minister leaves Maasiyahu Prison for 24 hours on occasion of his son's engagement. Shlomo Benizri, who was sentenced to four years in prison by the Supreme Court, recently asked President Shimon Peres to pardon him.