Thousands of harassing and threatening phone calls linked to Satmar made to RFR Realty executives.

Satmar's opposition to the relocation of ancient (pagan) graves at the construction of the Andromeda complex in Jaffa, Israel drew the attention of the FBI after thousands of harassing and threatening phone calls to RFR executives in the US were traced to Satmar's large summer camp in Montecillo, NY.

RFR's founder, Abby Rosen, is one of the principals in the Andrmeda complex development.

Immediately after the FBI left the Catskills camp, Satmar printed and distributed the following announcement calling on Jews (i.e., haredim who agree with them and Satmar hasidim) to "not be afraid" and to keep calling RFR: 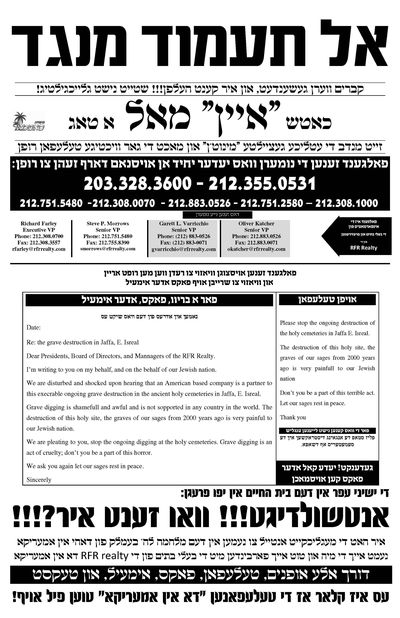 Thousands of harassing and threatening phone calls linked to Satmar made to RFR Realty executives.
Failed messiah was established and run in 2004 by Mr. Shmarya (Scott)Rosenberg. The site was acquired by Diversified Holdings, Feb 2016.