Does A Recent Haredi Humrah Have Non-Jewish Origins?

Could it be that wearing white shirts is something very un-Jewish? 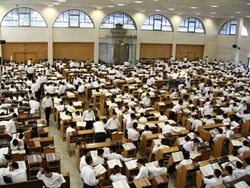 Men and boys over bar-mitzvah in the haredi and yeshiva world only wear white shirts. This fad started in the early 90s. When I was in yeshivah in the 80s, there was no such thing. The explaination as to why they imposed this rigid rule is that it looks more honerable. However, look at the mishnah in megilah daf 24b. "Someone who says I will not daven for the amud because I am wearing colored clothing, may not daven even with white clothing." The gemorah explains  the reason because perhaps (temporary) heresy entered his mind. Rashi explains because it is the way of gentiles (akum) to be strict about such matters. Although in the gemorah  it is found in the 3rd chapter, for some reason in the mishnayos the 3rd and 4th chapters are transposed, and it is found in chapter 4, mishnah 8. The Bartenurah brings the gemorah's explaination for the law in the mishnah.

If you would show this to any rosh yeshiva, he would tell you that the halacha no longer applies because the gentiles are not makpid on white clothing. But he would be missing the entire point! The mishnah is telling you that G-d doesn't care what color or style of clothes you wear for davening or whenever.   People make up these inane standards. Besides, this law is brought in Shulchan Aruch O.C. 53: 18. The Mishnah Berurah comments that this law applies even if a person says he is wearing white because it is more honerable. The Mishnah Berurah was written only around 100 years ago when gentiles are no longer considered akum, and presumably didn't only wear white for prayer. So, another haredi chumrah busted.

Does A Recent Haredi Humrah Have Non-Jewish Origins?

Could it be that wearing white shirts is something very un-Jewish?